Vail is home to a transplanted Minnesota ski racer who has broken new ground on the World Cup circuit, enjoyed great Olympic success, chased the records of the legendary Austrian Annemarie Moser-Proell and battled many injuries during her long career.

And her name is not Lindsey Vonn.

A decade before Vonn moved to Vail to train with Ski Club Vail in the ’90s, Cindy Nelson retired here after a career that included the first ever World Cup downhill win by an American (male or female), six career victories (still tied for fifth among American women), two World Championships medals and an Olympic bronze in the downhill.

Recent knee injuries aside, Nelson says Vonn has the strength and determination to get the four more wins needed to break Moser-Proell’s all-time women’s World Cup victory record of 62. Nelson competed head-to-head with the Austrian great, snapping her downhill win streak and making American ski-racing history in January of 1974. 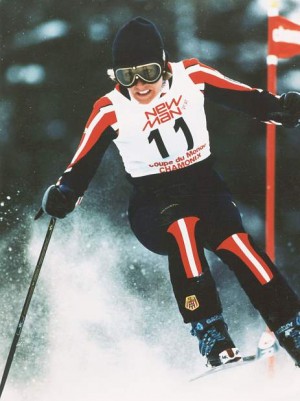 “I would still look for [Vonn] to break Annemarie’s record and continue to raise the bar up there, which is kind of interesting to think that I was the first one to break Annemarie’s win streak – a girl from Minnesota who was also transplanted to Vail — and then here’s Lindsey, but doing it much better than I ever did it,” Nelson said. “I’m so impressed with her and absolutely wish her the best and support her 100 percent.”

Nelson won that first World Cup downhill in Grindelwald, Switzerland, on Jan. 13, 1974 – two years after she crashed and dislocated her hip on the same mountain. That injury kept Nelson from competing in the 1972 Winter Olympics in Sapporo, Japan.

Thirty-three years later Dr. Marc Philippon of Vail’s Steadman Clinic operated on that hip, a culmination of a long surgical history for Nelson at the renowned orthopedic clinic. Throughout her career Dr. Richard Steadman performed seven knee surgeries and two ankles operations on Nelson, who now runs an organization called Here 2 Help of Vail that assists with aftercare and travel planning for people coming to Vail for surgery. She came up with the idea while struggling through rehab after her hip surgery in 2005.

Based on her own extensive surgical past, Nelson says she has no doubt Vonn, the Olympic downhill champion in 2010, will come back better than ever. The question now, after her latest setback, is if Vonn can come back in time for the Sochi Winter Games in February.

“Every [surgery] that I had I came back as good if not stronger than I was before, so that’s where I come to the idea that if you’ve got it, you’ve got it,” Nelson said. “Now take the time to heal, take the time to make yourself stronger all the way around and then go for it. There’s no question in my mind that Lindsey can do it.”

Nelson retired at the same age (29) that Vonn is now, calling it quits in 1985 to become first an ambassador for Vail Associates and then director of skiing. A few months after taking the job, George Gillett bought the company and Nelson stayed on, ultimately joining Gillett in helping to convince Steadman to relocate to Vail from the Lake Tahoe area.

Nelson, selected to the Colorado Ski Museum Hall of Fame in 2002, calls fellow Hall-of-Famer Steadman the most influential person in her storied career. She credits him with helping her refocus in order to win her only World Cup giant slalom in foul weather in British Columbia.

But by far the greatest memory for Nelson came during her breakout performance at the Winter Olympics in Innsbruck, Austria, in 1976 – the same Games that were supposed to be contested in Denver and Beaver Creek but were rejected by Colorado voters.

Nelson wasn’t even planning to go to the opening ceremonies, instead opting to lay low and conserve energy in hopes of becoming the first American to win an Olympic downhill gold. She was still carrying the weight of missing the Sapporo Games in ’72 and the expectations of winning downhills on the World Cup circuit. But she was picked to carry the flag for the entire American team at the opening ceremony.

Blown away by the intense energy rising up from the home crowd, Nelson nervously carried the flag into the stadium, leading the team to its designated spot. The Austrian team, coming in last as the host nation, marched in behind a meteorically rising young superstar ski racer.

“So who’s carrying the flag?” Nelson said. “Franz Klammer. In he comes and stands next to me with the flag … and he says to me, ‘So, you are Cindy Nelson. Which one of us is going to win first?’”

Klammer, of course, turned in the signature run of his legendary career, nearly crashing on every turn en route to winning the gold medal. Nelson claimed bronze in her race.

“We’ve become very good friends,” Nelson said. “I tease him all the time and say, ‘Franz, I’m still polishing my bronze and it hasn’t turned to gold yet. You win.’”

Editor’s note: During this Winter Olympic season and leading up to the 2015 FIS Alpine World Championships in Vail and Beaver Creek next season, this weekly series will tell Colorado’s rich ski racing history and heritage through stories about its ski heroes and legends. The stories first appear in the Vail Daily and are written for the Colorado Ski & Snowboard Museum Hall of Fame, located on the third level of the Vail Village parking structure adjacent to Vail Village Covered Bridge. The museum is open daily from 10 a.m. to 6 p.m. For more information, call (970) 476-1876 or go to www.skimuseum.net.