Tony Seibert, the 24-year-old grandson of late Vail founder Pete Seibert, died in an avalanche while skiing the East Vail Chutes just outside the Vail ski area boundary on Tuesday.

Three other snow riders with Seibert at the time of his death sustained non-life-threatening injuries and were treated and released, according to the Eagle County Sheriff’s Office.

Eagle County Coroner Kara Bettis identified Seibert’s body, adding that the cause and manner of his death will be determined by an autopsy. Seibert was a resident of both Boulder and Vail.

The slide was reported to the Vail Public Safety Communications Center at about 11:30 a.m., and emergency responders immediately made their way to the popular side-country ski area accessed off the top of Vail Mountain’s Outer Mongolia Bowl.

Seibert was featured in last year’s Warren Miller film “Flow State” and a documentary on the 10th Mountain Division called “Climb to Glory: Legacy of the Ski Troopers,” which was set to premier Thursday at the Vilar Center for the Performing Arts. The premier of Climb to Glory is now being rescheduled.

Pete Seibert trained and fought with the famed ski troopers during World War II in Italy, where he was badly wounded. He recovered and later teamed up with local rancher and prospector Earl Eaton to discover the terrain that would later become Vail Mountain. Seibert turned Vail into a world-class ski resort before leaving the company in the mid-1970s. He would later return to Vail Associates in the 1980s, raising his family in the Vail Valley.

“This is a shocking and terrible tragedy. Our hearts, thoughts and prayers go out to Tony’s entire family,” said Chris Jarnot, senior vice president and COO of Vail Mountain. “I want to acknowledge how integral the Seibert family is to the fabric of our community; their contributions to Vail date back to Vail founder Pete Seibert, Tony’s grandfather. 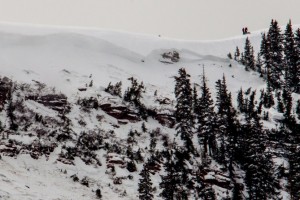 The avalanche that claimed the life of Tony Seibert on Tuesday (CAIC photo).

“This is an incomprehensible loss and we will support the Seibert family and our community through this difficult time. Tony had recently starred in, ‘Climb to Glory,’ a documentary that will forever be a tribute not only to the famed 10th Mountain Division and his family’s legacy but to a wonderful albeit tragically too short life.”

The CAIC rated the avalanche danger in the Vail, Summit County area as “considerable” on Tuesday.

Dear Ski & Snowboard Club Vail Family:
Yesterday, our community received the terrible news of the death of Tony Seibert in an avalanche in East Vail. Members of our staff and I wept and hugged learning of the tragedy.
Tony was both a member of one of Vail Mountain’s founding families and our family here at Ski & Snowboard Club Vail. The Seibert children; Pete, Tony, Anna and Lizzie were highly competitive ski racers at Ski & Snowboard Club Vail for over a decade with Tony and Lizzie going on to compete as Big Mt. athletes. In 2009 Tony represented SSCV in one of his final Big Mt. competitions in Laax, Switzerland and just recently, 24 year old Tony appeared in a Warren Miller film “Climb to Glory” re-tracing the steps of his grandfather and the 10th Mt. Division. Tony graduated from Battle Mountain High School in 2008 and the University of Colorado in 2012.
Parents Teri and Pete Jr. have been dedicated volunteers and supporters of Ski & Snowboard Club Vail including Pete’s serving on the Board of Trustees for many years and as President from 2001-2003.
The avalanche occurred while Tony was skiing with friends in an out-of-bounds “side country” area known as the East Vail Chutes. We are sadly reminded that even with hundreds of runs and years of experience in the back country, mother nature poses an untamed force that no human can overcome.
We will always remember Tony for his love of skiing and outdoors. His easy smile belied the burning passion and intensity with which he lived life.
Our thoughts, prayers and condolences go out to parents Pete Seibert Jr. and Teri Salani Seibert, siblings Pete, Anna and Lizzie, as well as, all the friends, family and loved ones affected by this tragedy. We mourn this tragic loss and a life well lived, cut much too short.
With profound sadness,
Aldo
Friends and family will celebrate Tony Seibert’s life on Monday, Jan. 13 at 6 p.m. at Eagle’s Nest. The Gondola will load at 5:30 p.m. Cards and letters may be sent to the Seibert family as noted below:

In lieu of flowers and food, the Tony Seibert Memorial Fund has been set up and is accepting donations at the Vail branch of First Bank (970-476-5686).