Kidd, Heuga set stage for decades of success with silver, bronze at 1964 Olympics in Innsbruck 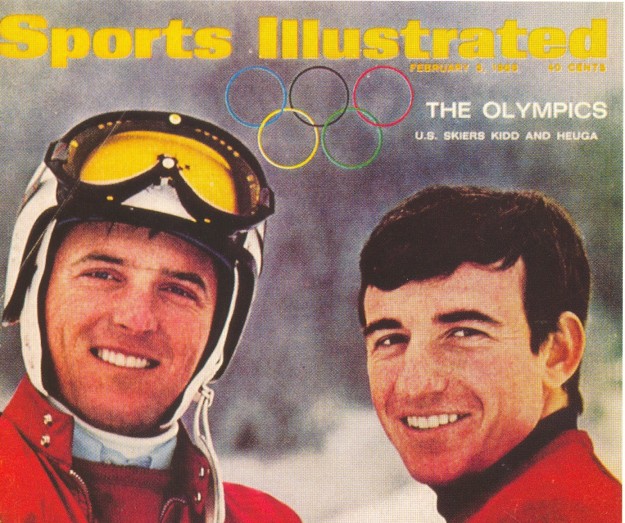 Billy Kidd and Jimmie Heuga on the cover of Sports Illustrated in 1964.

To say there was a little pressure on the American men heading into the final alpine event of the 1964 Winter Olympics in Innsbruck, Austria, is to engage in a massive act of understatement.

American women had piled up seven medals (three gold) in the five Olympic Games leading up to Innsbruck, including three silvers on home snow at Squaw Valley in 1960. The American men were shut out of the medals at Squaw and had been blanked at all five Games since alpine skiing debuted in 1936 at Garmisch, Germany.

Steamboat’s Buddy Werner, the greatest American racer of his day, had broken his leg training at Aspen two months before Squaw, so at age 28 he went into the 64 Olympics on the downside of his storied career – still seeking that elusive first U.S. men’s medal on the sport’s greatest stage.

Then there was the coach. Hard-charging Bob Beattie — a former football coach turned two-time NCAA champion ski coach at the University of Colorado. Beattie was brash, driven and intensely demanding of his athletes. He also pulled a Joe Namath five years before the Jets’ quarterback guaranteed victory over the Colts in Super Bowl III – promising men’s medals.

But so far at the 64 Games, the American women had done their usual part, with Jean Saubert collecting a bronze and a silver in slalom and giant slalom (GS), but the men had once again missed the podium in the downhill and the GS.

Beattie desperately needed a medal of any color when his four American men — William Winston “Billy” Kidd, Jimmie Heuga, Chuck Ferries and Werner — took to the snow for the closing slalom on Feb. 8, 1964.

“The problem that we had is we had promised America 1-2-3 in every event, so we had no way to go but down, and this was the last event,” Beattie said by phone from his home in Woody Creek near Aspen. “To say there was a little pressure was good in a way, because it meant everybody really focused and charged and we wanted it badly.”

Kidd and Heuga wound up claiming silver and bronze, with Kidd just .14 seconds from Josef “Pepi” Stiegler’s gold-medal time and Heuga just .39 behind in the first Winter Olympics in which times were calculated to the hundredth of a second by IBM.

Kidd also won the overall title of the inaugural World Pro Ski Tour, which Beattie founded in 1970. “[Beattie] changed the sport in America and certainly changed our lives,” added Kidd, who was 20 when he won his medal 50 years ago Saturday.

“This is the greatest day in our ski history,” Werner said after the race, according to a Sports Illustrated article at the time. “For a lot of years I was the only guy, but now we’ve got these two and we’ll get a bunch more.”

Werner would die in an avalanche while filming a ski movie in Switzerland a little over two months later, and 50 years later teammate Bill Marolt says Werner’s death still “leaves a deep, deep hole in your heart.”

Marolt, who didn’t race in that slalom but was 12th in the GS at Innsbruck, never again raced in the Olympics. Instead he went into coaching, and his CU ski teams won seven national titles in 10 years; Bill Johnson and Phil Mahre finally won U.S. men’s gold medals when Marolt coached the U.S. Ski Team at the 1984 Sarajevo Olympics; and CU won a national championships in football when he became athletic director.

Now the outgoing president and CEO of the United States Ski and Snowboard Association, Marolt has presided over the most successful U.S. ski teams ever. His “Best in the World” mantra drew heat from European ski powers during the 2006 Torino Games, but at the 2010 Vancouver Olympics the record American medal haul proved his point. Call it bravado, call it determination, Marolt says he got it from Beattie.

“A lot of the things that I do today are lessons I learned going clear back as an 18-, 19-, 20-year-old,” said Marolt, who credits Beattie with originating and executing the concept of the U.S. Ski Team. He credits Werner, Kidd and Heuga with laying the foundations for future success.

“Buddy coming out of Steamboat Springs and going to Europe, battling away, attaining the results and getting the respect of the international press and becoming an international star,”Marolt said. “Motivating kids to get involved.

“And Jimmie was the ultimate when you talk about focus and the willingness to put yourself to the test, and everything that he did as a competitor as part of that team manifested itself when he was stricken with MS [multiple sclerosis in 1970]. He didn’t let it defeat him. He helped himself and he’s helped hundreds of thousands of other people by his attitude and by his actions.”

“Our organization, USSA and the U.S. Ski Team, we have a history of success if you go back through the years,” Marolt said, “particularly Buddy and Billy and Jimmie; they’re a huge part of that history, a huge part of the foundation.”