Who had better celebs over the holidays: Aspen or Vail? 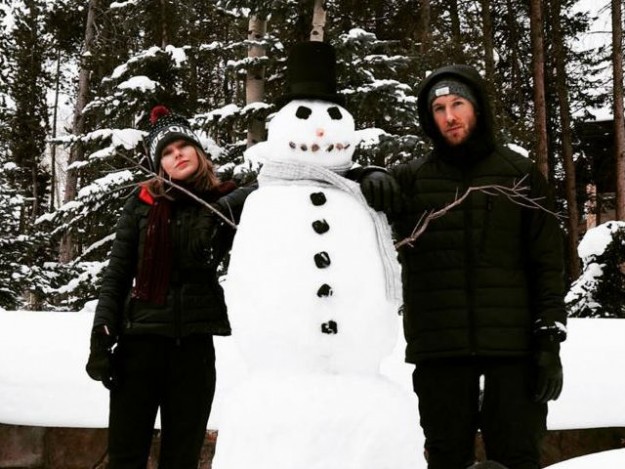 So who was a better get over the holidays in terms of ski-town celebrities: Taylor Swift or Dakota Johnson?

Is that really even a contest? Pop music’s top draw or the 50 Shades of Grey star?

Swift, her family and her Scottish deejay boyfriend, Calvin Harris, stayed a place up in the Strawberry Park neighborhood of Beaver Creek over the holidays, while the national media largely just reported she was in Vail. Locals know there’s a difference between the Beav’ and Vail.

Swift and Harris made snowmen, posting photos on Instagram, and they all reportedly dined at on-mountain Zach’s Cabin. Other reports had them hitting the Wolcott Yacht Club a couple of times.

Johnson, the daughter of actors Don Johnson and Melanie Griffith, was seen in Aspen, hanging out with her mom and another famous mom-daughter acting combo, Goldie Hawn and Kate Hudson.

Not sure if Johnson and Griffith were staying at the house she owns with actor Antonio Banderas on the backside of Aspen Mountain, which is currently on the market after their divorce was finalized last summer.

Meanwhile, back at the Beav’, the family of arguably the greatest living American actor, Robert De Niro (judge him on Taxi Driver and Raging Bull, not recent comedic work) reportedly stayed at the Park Hyatt. De Niro himself supposedly was not here for the holidays.

Some other lesser musical stars were (although back in the day Cat Scratch Fever may have been as big as We Are Never Ever Getting Back Together). That’s right, Ted and Shemane Nugent were here in Vail and apparently come every Christmas.

Aspen gets its share of music celebs, and these past holidays were no different. Diva Mariah Carey and her Australian billionaire media mogul boyfriend James Packer made sure they were spotted all about town.

Just before the holidays, a group of polo players was in Aspen for the World Snow Polo Championships Dec. 17-19, and Jessica Springsteen, Bruce’s daughter, was seen partying and dancing with them at the Little Nell’s après ski bar, Chair 9.

Telluride, of course, gets more than its share of big names. This past holiday season actress Jennifer Aniston and her new hubby Justin Theroux were in town before reportedly jetting off to Mexico for some more fun in the sun.

Locally, lots of sports celebs quietly spin through town, usually to visit Vail’s famed Steadman-Philippon Clinic for some quick orthopedic work, but one of the valley’s biggest names, ski racing Olympic gold medalist Mikaela Shiffrin, was unfortunately here for the holidays rehabbing her injured knee instead of racing in Europe.

While hard a work getting her knee back in shape for racing, Shiffrin, 20, said she’s not currently dating “anyone scandalous” and is “single and ready to mingle.”

There you have it: A by-no-means comprehensive look at some of the celebs in Colorado ski country for the holidays. Who was the big winner: Aspen or Vail? You be the judge.