So far March has been largely disappointing in terms of snowfall for the Vail Valley, with mostly sunny, dry conditions and only a couple of minor storms. That pattern appears to be changing with a pair of weekend storms targeting Vail and Beaver Creek ski areas.

“The most intense snow will begin on Thursday afternoon or early evening and then snow showers will continue through Friday morning. Most mountains should get 4-8 inches with fun powder on Friday morning, though accumulations will be very random so there will be surprises on the high and low side,” Opensnow.com meteorologist Joel Gratz wrote Thursday morning.

“The next batch of snow will hit on Sunday and possibly continue through Sunday night, so look forward to powder on Sunday afternoon and perhaps Monday morning. We might see light snow continue through Tuesday morning, then the middle of next week should be dry. The next storm should arrive around next Thursday, March 22.”

There’s only about a month remaining in the below-average 2017-18 ski season, with both Vail and Beaver Creek scheduled to close on Sunday, April 15.

Besides some steadily softening snow conditions, this weekend should offer up plenty of fun for the whole family — from the Shamrock Shuffle snowshoe race to all kinds of music and sporting events around town. Check out the Vail master calender of events for more information.

And this is also the final weekend for alpine ski racing action on the World Cup circuit, with EagleVail’s Mikaela Shiffrin trying to wrap up her second-straight overall championship season in style at the World Cup Finals in Are, Sweden. 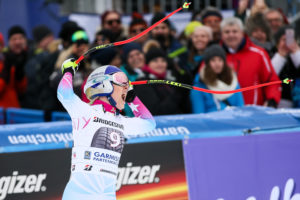 On Thursday, Vail’s Lindsey Vonn — the day after notching her women’s record 82nd World Cup in a downhill at Are — finished third in a super-G won by Italy’s Sofia Goggia. So Vonn’s season appears to be over, and it was a remarkable one by any set of standards.

Vonn’s standards are incredibly high, so she may disappointed she “only” won bronze in the downhill at the 2018 Pyeongchang Winter Olympics, but at age 33 she became the oldest woman ski racer to ever win an Olympic medal. And that bronze joins another one in super-G and a gold in downhill from the 2010 Vancouver Winter Games. Quite a run.

Vonn also won five World Cup races this season, including the last four downhills, and now is just four wins from tying the record of 86 career victories held by the legendary Ingemar Stenmark. And Vonn did all of this while weathering a firestorm of controversy over comments she made to CNN about the behavior of our president and current administration in the White House. She spoke out at a time when we all need to be speaking out.

Here’s an interesting take from Megan Harrod of the U.S. Ski and Snowboard Team on Wednesday’s win for Vonn and all of the controversy:

“LV closed out the season with a downhill victory bringing her win tally to 82, but Goggia was less than a tenth of a second behind her in second place. As LV sat in the leaderboard watching each athlete come down, she hoped for someone to sneak in between her and Goggia – though knew it was a long shot. Czech Republic’s Ester Ledecká was running 22. She looked at me and said with a giggle, “I’ve never wanted a snowboarder/skier to be on the podium more than I do today.” Ledecká skied well, but it was no cigar…into 12th. She shook her head in the finish. Then, it was teammate Alice McKennis. LV crossed her hands into prayer position and watched Alice come down, hoping for her to podium both because she genuinely wanted it for Ali, and also because she genuinely wanted the downhill title. Ali crossed the finish line and…into THIRD PLACE!! WOW. Lindsey was stoked for Alice. Obviously disappointed she didn’t win the title, but happy for the win on the day and elated for Alice.

“Alice McKennis’ journey back to the podium has been nothing short of incredible. Through grit and perseverance, and a hefty amount of patience and hard work, she landed on her second career podium yesterday – for the first time since 2013 when she won in St. Anton. After that win, Alice suffered from one gnarly injury after another. If you didn’t read her latest blog yesterday, it’s worth the listen today. It will give you a lot of insight into her mindset and what she’s overcome to return to the podium. She is, by far, one of the hardest working athletes I have ever encountered.

“I have to say, Sports Illustrated’s Tim Layden, the legend, wrote quite the article about Lindsey at the Olympics – one of my favorite of the Games, in fact. He stated, “To be sure, sports doesn’t deserve the ugliness of our most vile political wrangling. Back to this: Vonn was asked a question and answered it. That’s what professional athletes are supposed to do. Vonn has been a ski racer since she was a teenager. She is, above all things, likeable. She couldn’t be more Minnesotan if she were cast in the next season of Fargo. But also, she went through a public divorce and dated Tiger Woods—Live, on TMZ! She’s not weak, and while she’s happy to accept our support against the haters, she really doesn’t need it. She’s a big girl…

“…Either way, the trolls will come for her. And she will take it. And she will laugh. Because she is one of the greatest skiers in history—successful and famous and happy. And they are nothing.

“I loved this bold piece, and yesterday it came to mind as I watched LV and Alice up on the podium as the flags were raised and the National Anthem played. With their hands on their hearts and their eyes on the flags, full of pride and happiness to be sharing that moment together. And at that moment I thought to myself, “WOW…82 times (plus three more including the Olympics and World Championships) LV has allowed the ski world to listen to the Star-Spangled Banner. I’m not sure what’s more patriotic than that. Land of the free. Home of the brave. And indeed, there have been few athletes out there braver than LV.”