Vonn may not race again before Olympics but Shiffrin keeps things interesting for U.S. squad

An uncooperative right knee may keep Vail’s Lindsey Vonn from racing again on the World Cup circuit before the rapidly approaching Sochi Winter Olympics, but that doesn’t mean the women’s tour is without drama for American ski-racing fans.

True, Vonn went into this season just four victories from setting the record for the most career World Cup wins, but another Vail Valley racer – at an earlier age than Vonn – is already climbing the same victory ladder at an astonishing clip. 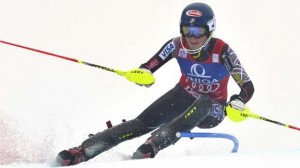 Eagle-Vail’s Mikaela Shiffrin needs just one more win to tie Vail’s Cindy Nelson and Edwards’ Kristina Koznick for fifth on the career victory list for American women with six. Californian Julia Mancuso, who holds the record for most Olympic medals (three) by an American woman, is just two World Cup wins ahead of Shiffrin with seven.

Last Sunday, Shiffrin narrowly missed nabbing her sixth career win, finishing second in Lienz, Austria. But at least she was edged by the greatest women’s slalom racer of all time, Austria’s Marlies Schild, who claimed her record 35th career slalom win and took over sixth on the all-time women’s victory list with 36 overall wins.

“Having Marlies next to me on the podium is great,” Shiffrin said Sunday. “I always want to win, but she skied better and was faster. I am OK with taking second place. She is still one of my idols and she keeps inspiring me. As long as I am on the podium with her, I am happy.”

The Eagle-Vail racer may not be quite so accommodating on Feb. 21 when the women’s slalom is contested at the Sochi Winter Olympics. Shiffrin’s five World Cup wins have all come in slalom, and she’s the defending world champion after winning the event last February in Schladming, Austria, where Vonn first crashed and blew out her knee in the super-G.

Shiffrin gets another shot at Schild at the next women’s World Cup stop on Sunday — a slalom moved to Bormio, Italy, due to lack of snow at the regularly scheduled venue of Zagreb, Croatia.

For Vonn, who reinjured her surgically repaired knee in a training crash at Copper Mountain in November, the next chance to race is likely Jan. 9-12 at Altenmarkt-Zauchensee, Austria, where the speed events of downhill and super-G will be contested. Vonn hasn’t been competing in slalom or giant slalom so far this season. After Altenmarkt-Zauchensee, speed events will be held Jan. 16-19 in Cortina, Italy.

“She has indicated she might consider racing Cortina, but it’s too early to say that she’s going to,” Vonn’s coach, Alex Hoedlmoser, recently told the Associated Press. “Maybe she won’t race at all if she feels she can do without another race in her preparation for Sochi. I think she’s handling it well and she’s determined to race in Sochi.”

After skiing off course in a downhill at Val d’Isere, France, on Dec. 21, Vonn admitted what has been previously described as a partially torn anterior cruciate ligament in her right knee is in fact completely severed.

“Unfortunately, today’s race did not go as well as I had hoped,” Vonn said on Facebook that day. “I was skiing well and in contention for a podium finish when my knee gave out on me in a turn.

“I’m fighting as hard as I can to keep my Olympic dream alive, but skiing with no ACL is harder than I expected. I’m going see how my knee responds over the next few days and make a plan going forward.”

The women’s downhill is scheduled for Feb. 12 at the Sochi Games. Vonn, the defending Olympic downhill champion, has said she would like to get a World Cup win this season to give her confidence going into Sochi. She currently is second overall with 59 career wins, just three behind the record of Austrian great Annemarie Moeser-Proll.