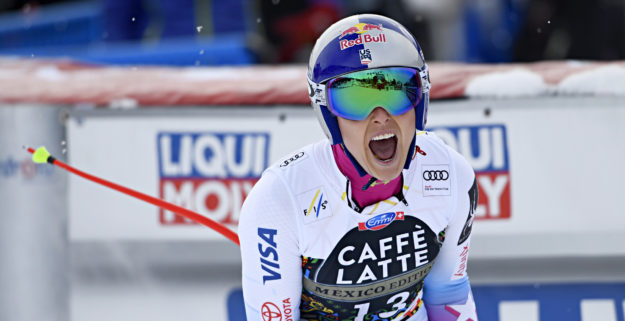 It was the result Vail’s Lindsey Vonn was looking for last month at the 2018 Pyeongchang Winter Olympics — the top step of a downhill podium Wednesday at the World Cup Finals in Are, Sweden, with Italy’s Sofia Goggia in second.

But the 82nd career World Cup win for Vonn still wasn’t enough to wrestle the season-long downhill title away from Goggia, who won the crystal globe 509 points to 506 for Vonn.

Vonn was looking for her record-extending ninth World Cup downhill title but instead will have to settle for extending her women’s record of 82 World Cup wins — just four shy of tying all-time men’s winner Ingemar Stenmark of Sweden with 86 victories.

Alice McKennis of New Castle also made the podium in third with a time of 55.93 — her best results since winning in St. Anton in 2013.

EagleVail’s Mikaela Shiffrin did not race in the season’s final downhill, having wrapped up her second-straight overall World Cup title last weekend in Ofterschwang, Germany. She’s scheduled to race in the final tech events of slalom and giant slalom over the weekend.

Vonn gets a chance to pick up win No. 83 in Thursday’s super-G at Are.

Vonn’s win was her fourth-straight downhill victory on the World Cup circuit, somewhat of a concellation for finishing third in last month’s Olympic downhill to claim the bronze behind gold medalist Goggia.

Vonn is the only American woman to ever win downhill gold at the Olympics, claiming that victory at the 2010 Vancouver Winter Olympics. She was also gunning for the most ever season titles in a single discipline — a record she shares with Stenmark (eight in slalom).

Here’s the U.S. Ski and Snowboard Team press release on Vonn’s win Wednesday in Are:

For the 82nd time in her illustrious career, Lindsey Vonn (Vail, Colo.) stood atop a World Cup podium after winning the downhill at the World Cup Finals in Are, Sweden Wednesday. Best of all, she shared the podium with her teammate, Alice McKennis (New Castle, Colo.), who finished third.

Although she came up just short of her ninth World Cup downhill title, Vonn did win the last four downhill events of the season. Italy’s Sofia Goggia, who won two of the eight downhills this season, finished second Wednesday and just nipped Vonn for the downhill title by three points.

“I’m really happy to close out the season with a win, and I’m sure (Sofia) is very excited to have the title,” Vonn said. “Sofia always gives it 110 percent and sometimes she wins, and sometimes she crashes. I feel like she is very similar to myself. We have a great deal of respect for each other and it’s been fun to compete with her this year.”

For McKennis, it was her first trip to the podium since 2013 when she won the downhill in St. Anton, Austria.

“It’s been a while,” McKennis said. “I’m so stoked! It’s been a journey to get here again and to be on the podium again is amazing.”

Wednesday’s race started from the lower start position after the morning training run was canceled due to fog and snow, but that didn’t stop Vonn from nailing her line on the course that will host the 2019 World Championships.

“I don’t think we’ve ever raced from very high up,” Vonn said. “There has always been the problem of fog and wind, so I definitely think that will be a determining factor in the World Championships next year.”

Bryce Bennett (Squaw Valley, Calif.) didn’t put down the result he was hoping for, finishing 24th in Wednesday’s World Cup Finals downhill in Are, Sweden.

Up next, the men and women compete in super-G Thursday in Are.