Coming off 12th-place finish at Pyeongchang Winter Olympics, 17-year-old makes it through five runs for win in Japan 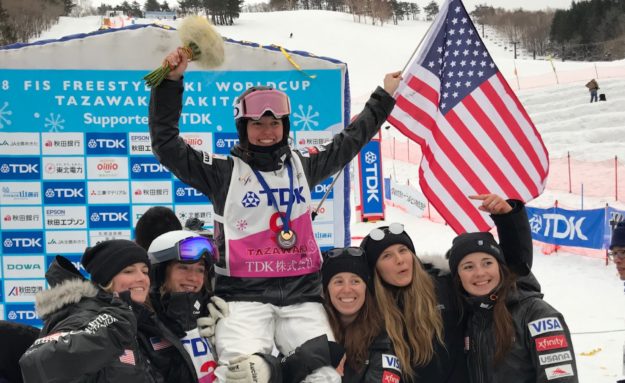 The youngest member of the team at 17, Johnson is coming off her Olympic debut last month in Pyeongchang, South Korea, where she made it through to the finals and wound up 12th in the world.

According to her mom, Carol Johnson, Tess won 60 pounds of rice at the Japanese venue. Teammate Morgan Schild confirmed the rice on Facebook and praised the win for Johnson:

“YEAH (not so) little Tess Johnson!!!! Im so proud of this 17 year old winning her first World Cup and 60 pounds of rice!! Japan is the best place to win!!” Schild wrote.

Tess Johnson (Vail, Colo.), the youngest member of the U.S. moguls team at 17 years old, made it through five runs down the Tazawako moguls course on Sunday to claim her first World Cup victory in dual moguls. The win was also Johnson’s first podium of her career and came just a few weeks after she made her Olympic debut.

Johnson was one of four U.S. women who made it out of the qualifying rounds. She skied consistently throughout the day leading into her final dual against last year’s overall World Cup winner Britteny Cox of Australia. Johnson took the win with a score of 22 against Cox’s 13. Germany’s Laura Grasemann was third.

On the men’s side, Emerson Smith (Dover, Vt.) and Troy Murphy (Bethel, Maine) represented the U.S. men in the round of 16, but were unable to advance and finishined 11th and 13th. Japan’s Ikuma Horishima once again upset Canada’s Mikael Kingsbury to take home his second win of the weekend on home soil. Kazakstan’s Dmitriy Reikhard repeated his result from Saturday’s moguls event with another third place finish.

After this weekend’s results, the U.S. has four women ranked in the top 10 in the World Cup standings; Kauf is third, Johnson is seventh, McCargo eighth and Morgan Schild (Pittsford, N.Y.) 10th. The World Cup tour continues next weekend with men’s and women’s dual moguls in Airolo, Switzerland.