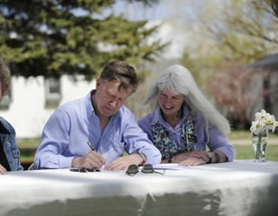 A Colorado lawmaker responsible for one of the few successful pieces of oil-and-gas regulatory legislation last session says next year she’ll take up the issue of water contamination and greater setbacks in the wake of this month’s devastating flooding.

Rivers across Northeastern Colorado – including the South Platte and St. Vrain – have been inundated with a variety of contaminants from flooding that started Sept. 11, and Mitsch Bush said it’s important not to minimize the potential health impacts of the 1,042 barrels of oil regulators confirmed have spilled in the flood zone.

“You’ll hear from some sources that it’s only light [crude]. Don’t be confused by that,” said Mitsch Bush, who last session sponsored the bipartisan “spill bill” that lowered the mandatory spill reporting threshold from five barrels to one. “Any oil, any condensate, has the BTEX [benzene, toluene, ethylbenzene, and xylene] component and many others.

“All of those are very contaminating in a water body in relatively small portions. I think it’s really important that we don’t minimize what’s in there, but at the same time that we don’t have a huge overreaction either.”

Benzene is a known carcinogen that has raised concerns of elevated cancer rates among some physicians. Weld County, one of the hardest hit by the widespread flooding, is home to more than a third of all the state’s active oil and gas wells (20,554). More than 1,900 wells were “shut in” — with production operations fully shut down — during the floods.

As of Monday, the COGCC – the chief state regulatory agency for oil and gas drilling – has confirmed 1,042 barrels (43,764 gallons) of oil have spilled in 14 separate “substantial” releases in the flood zone. COGCC officials also said they’re still tracking 16 other locations with evidence of oil releases, such as a sheen on the water, and have tallied 12 produced water releases totaling 413 barrels (17,350 gallons).

Asked about the potential for new setback laws or rules as a result of the floods, a spokesman for the Colorado Oil and Gas Association (COGA) – a trade group – said the industry is still focused on recovery, safety and getting production back online.

“Once flooding began, over 1,900 wells were shut in,” COGA Director of Policy and External Affairs Doug Flanders said in an email, referring to the organization’s website for shut-in procedures. “To date, this has resulted in less than 1 percent of the wells having any isolated incidents due to debris-filled flood waters.

“Industry is focused on the safety of its employees and operations, returning shut-in facilities back to production, and assisting our neighbors in getting back on their feet. This is the time we, as Coloradans, need to work together to rebuild Colorado.”

Flanders did not specifically respond to a request for comment on setbacks or calls for a ban on drilling in floodplains. Eric Brown, spokesman for Gov. John Hickenlooper, said late last week it’s too early to know whether oil and gas impacts and new regulations might be one of the topics of a possible special legislative session on flooding.

“Most of the controversial activity on the Front Range with regard to setbacks was much more concerned with residential, schools, hospitals, etc., and that’s really important,” Mitsch Bush said, “but my first thought is water – our rivers, our creeks.”

Asked what might constitute an appropriate setback for oil and gas drilling and production operations away from water sources, Mitsch Bush said that needs to be discussed in the two House committees she serves on — Agriculture and Natural Resources and Transportation and Energy.

“I don’t know what the perfect solution is,” Mitsch Bush said. “In my experience, you don’t ever get a perfect solution, but you get a better, a good, a sufficient solution if you can work with all the groups and sit down, talk about it, work together and see what you can come up with.”

Environmental and citizen activist groups are likely to demand much more action in the coming legislative session in the wake of the floods.

“It is only good, common sense that oil and gas drilling shouldn’t happen close to our homes and schools, or our lakes, streams, and important riparian areas,” Conservation Colorado Executive Director Pete Maysmith said in an email statement. “As we rebuild, we need stronger safeguards in place to help avoid future damage to our communities, water, and wildlife habitat.”

“The City of Aurora requested a one-mile setback between fracking and their reservoir in Park County — that should make a good starting point for the discussion in the state’s new rulemaking process for setbacks between fracking and any type of water source, ground or surface,” Wockner said.

“Banning new drilling and fracking in 100-year floodplains is also a good starting point for discussion in that rulemaking process,” he added.

Mitsch Bush said it may be some time before the Colorado Department of Public Health and Environment (CDPHE) knows just how badly water sources have been contaminated in northeastern Colorado. A CDPHE spokesman said last week that planned water sampling of impacted rivers and streams would begin last Thursday, more than two weeks after flooding began.

“We still don’t know the extent or the level of the various pollutants, and we need to better understand that,” Mitsch Bush said. “It’s coming from dry cleaners, it’s coming from gas stations, it’s coming from sewage, every possible source. In addition, into the brew we have these oil and gas releases. People should be heeding the warnings from CDPHE for sure.”

Editor’s note: A version of this story first appeared Monday on the website of Colorado Public News, an award-winning nonprofit news network with nearly 50 media partners.