The Vilar Performing Arts Center (VPAC) welcomes the quirky band The Slambovian Circus of Dreams on Monday, Sept. 28 at 7:30 p.m.

The music of The Slambovian Circus Of Dreams has been variously described as “hillbilly-Floyd,” “folk-pop,” “alt-country, roots-rock,” and “surreal Americana;” a clear indicator of its singularly indescribable uniqueness. Single tickets to The Slambovian Circus of Dreams are $25 or you can purchase an Underground Sound Pass for $100 (includes 7 shows & 7 drinks); both options are on sale now at the VPAC Box Office (970.845.8497/ www.vilarpac.org). The VPAC is located under the ice rink in Beaver Creek Village (68 Avondale Lane, Beaver Creek, Colorado). 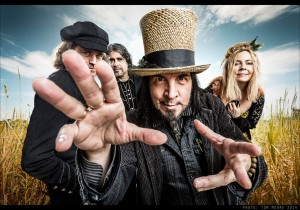 Together since the late ’90s where they met in art school, they settled in Sleepy Hollow, New York, and formed The Slambovian Circus of Dreams. The band has toured nationally and abroad since forming in 1998. Known for their electrifying live performances, and critically acclaimed original music, they have an extremely devoted fan base.

The Slambovian Circus of Dreams’ music throws in elements of Incredible String Band, Neil Young, The Band, Dylan, and maybe even some Frank Zappa as well. This past spring the band finishes a year long tour of the U.K., US and Canada where they spread their contagious brand of quirky Americana promoting their album A Box of Everything – their Sony Red distributed ‘greatest hits you never heard’.

Soon unleashing their hauntingly signature songs on the world once again, the bands next studio album, A Very Unusual Head, is scheduled for release in early 2016. The new songs should knit into the band’s classics like an old paisley quilt wrapped around a very large family. The ultimate DIY’ers, the band runs its own label and has previously released 4 critically acclaimed studio albums and one ‘greatest hits’, A Box of Everything released in 2014, The Grand Slambovians (2010), The Great Unravel (2008), 2004’s double-disc Flapjacks from the Sky, and A Good Thief Tips His Hat (1998).