Skiing versus football: Manning makes it a tough call

Sunday for me represented one of those tough choices Coloradans face every year right around this time: go skiing or watch the Denver Broncos.

In this case, it wasn’t too painful of a decision. I already had tickets to the Jacksonville game when Arapahoe Basin announced late last week that it would kick off the 2013-14 ski season on Sunday.

Let’s see, my first chance to see Peyton Manning in person during his record-breaking march to the playoffs, or my first turns on snow since April. The Orange Assassin versus the White Ribbon. Not really much of an internal debate.

Still, after watching the Broncos turn in their worst offensive showing of the season so far, including an abysmal second quarter that had fans booing the 14-12 halftime score, I was wondering whether I’d made the right call. In fact, despite the biggest point spread in NFL history, the Jags were only down 21-19 midway through the third quarter. 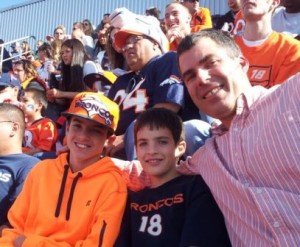 Then Manning and his Mannequins stepped on the gas and won relatively easily by a final of 35-16. A-Basin, meanwhile, which usually opens on a weekday, reportedly was pretty packed with “high-spirited” snow riders. Both A-Basin and Loveland, which opens on Thursday, should be a little more conducive to carving some relaxed early-season turns the rest of this week.

The orange-clad loonies surrounding me Sunday weren’t actually booing the Broncos’ brutal second quarter (two punts, a lost fumble and a pick-six interception) as much as they were booing coach John Fox’s decision to just run out the clock and sit on that two-point lead.

The Jan.12 memory of Fox telling the second-greatest statistical quarterback of all-time to take a knee on his own 20 with the score tied, 31 seconds on the clock and two timeouts is still too fresh.

Fox played the odds and played for overtime that day against the eventual Super Bowl champion Baltimore Ravens, and the Broncos wound up losing in overtime and being bounced prematurely from the playoffs. That opened the door for former Broncos’ QB Tim Tebow’s brother Peter to snidely point out that Tim fared a lot better in the first round of the playoff the year before.

Fox’s conservative call and that painful memory is what we were booing on Sunday, not Peyton’s putrid second quarter (even the great ones wobble once in a while). And until Manning erases that memory with a home playoff victory – forever exorcising the demons of Tebow – Peyton will always play second fiddle to his boss, two-time Super Bowl winner John Elway.

A big reason I took my boys to Sunday’s game is I strongly feel that when greatness presents itself in your own backyard, you must witness it firsthand. Like watching Bode Miller win a downhill on the Birds of Prey course at Beaver Creek. Or seeing Tejay van Garderen (a future Tour de France winner) claim the Vail Pass Time Trial this summer in the USA Pro Challenge.

I saw Elway in person many times, but never more memorably than when Vail Daily owner Jim Pavelich treated his staff to a Jan. 4, 1992, AFC Divisional playoff game at old Mile High Stadium between the Broncos and Warren Moon’s Houston Oilers. Elway led one of his patented last-minute fourth-quarter drives to victory – including fourth-down conversions — and pandemonium quite literally ensued.

My obsession with being there for great moments in Colorado sports history extends to baseball. From Eric Young’s leadoff, home-opening homer for the Rockies in 1993 (I was there and in the locker room afterwards covering it for the Vail Daily) to the one-game play-in against the San Diego Padres that propelled the Rockies to the World Series in 2007, I’ve been there for a lot of the big hits.

But none was bigger than Todd Helton’s 2,500th hit just last month at Coors Field, a double I had the pleasure of witnessing with all three of my boys in tow. So it was fitting that when they attended their first Broncos game on Sunday, the newly retired Helton – Manning’s backup QB at the University of Tennessee — was honored before the game.

So now that a Manning game has been checked off my bucket list, I’m just hoping for a couple of those super-snowy night games to be televised to a national TV audience so everyone’s convinced the powder is piling up all the way from the 16th Street Mall in downtown Denver to the top of Vail Mountain. That’s good for the ski biz.

Remember the Monday Night Football Game against the Packers in a blizzard back on Oct. 15, 1984? OK, I barely do too. But there was a huge next-day spike in reservations from flocks of Midwesterners in one-piece ski suits, day-glow Columbia Bugaboo coats and NFL starter jackets.

Football can be one of the best marketing tools for the ski industry. Let’s just hope the viewing doesn’t interfere with the skiing.