Don Suppes, the Republican candidate for Senate District 5, sympathizes with backers of last year’s secession movement in Colorado, while his Democratic opponent – Kerry Donovan – says Suppes’ views are far too extreme for the sprawling seven-country district.

The 51st State Initiative, a nonprofit that in 2013 convinced voters in five northeastern Colorado counties to pursue breaking away from the state over gun-safety and energy policies, later threw its weight behind Restoring Colorado, a ballot initiative bid for one State House representative per county. The group came up short on signatures in July, but vows it will try again.

In total, 11 counties voted on the secession issue – including just one on the Western Slope (Moffat) – but six counties rejected the question. The five that approved secession questions never seceded because it required approval of both the state legislature and U.S. Congress.

“It’s just really the urban-versus-rural divide and the change of culture in the state from being traditional agriculture-based to becoming large city-based, and the differences in values between big cities and people who live in rural communities,” secession proponent Jeffrey T. Hare told the Colorado Independent.

The ballot initiative, also called the Phillips County Proposal for officials there who supported secession and now seek one representative per county, will likely be resurrected for 2016, Hare said. Instead of drawing up districts based on population, the State House would go from 65 representative down to 64 – or one per Colorado county, no matter its population.

“The government is meant to be cooperative across a wide variety of interests as opposed to the tyranny of the majority imposing its will on the minority,” Hare said. “That’s it in a nutshell.” 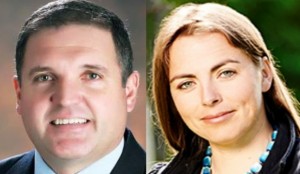 The group is not proposing any changes to the way the Colorado Senate is structured, so SD5 would not be impacted if the Phillips County Proposal ever makes it on the ballot and is approved by voters.

“In one respect I do understand the reason for supporting [one representative per county],” SD5 candidate Suppes said. “But when you’re trying to say that Hinsdale County with 843 people deserves the same representation as Denver County with a million, that’s going to be a tough pill to swallow.”

“If people don’t really feel comfortable with that model, that’s what we have at the federal level [in the U.S. Senate], and frankly the U.S. Constitution would never have been approved if that Great Compromise hadn’t been put in place,” Hare counters.

Suppes, the mayor of tiny Orchard City in Delta County on the state’s Western Slope, says Snowmass Village Democrat Gail Schwartz, who currently represents the sprawling seven-country SD5 but is term-limited, was in lock step with Front Range lawmakers on issues such as gun control.

“There’s a real concern out there about the rural disconnect that we have out here,” Suppes said. “Our current state senator hasn’t helped any. She voted with Denver Democrats 98 percent of the time.”

“You’ve got everything going on in SD5 and you’ve got to be a moderate voice who’s willing to listen to anyone and have a very big table to bring everyone to in order to represent the district. I can have a lot of conversations with people by being a moderate, more so than being extreme on either end of the spectrum.”

Senate District 5, which is viewed as critical to Democrats maintaining their 18-17 majority in the State Senate, is comprised of Pitkin, Eagle, Lake, Chaffee, Delta, Hinsdale and Gunnison counties.

The secession question has percolated up even to the governor’s race.

Bob Beauprez, a conservative Republican dairy farmer who represented Colorado’s 7th Congressional District from 2003 to 2007, reportedly sympathizes with the secession movement of 2013, saying liberal lawmakers are “shoving legislation, whether that’s gun control or renewable energy mandates or restrictions on oil and gas development, shoving them down rural Colorado’s throat.”

Incumbent Democratic Gov. John Hickenlooper, meanwhile, said the secession issue “really led to debates and discussions that are going to make each of your counties stronger and, I think, ultimately make the state stronger.”

But Hare said that was mere lip service.

“Prior to the campaign for Hickenlooper it was really all talk and no action,” Hare said. “He did his rural tour and pretended like he was a man of rural Colorado, but he hasn’t shown any substance to that and I don’t really anticipate anything different. He has his agenda and he’s going to continue to push that – say one thing, do another kind of a thing.”

Hare said there was a third idea that came out of the 51st State Initiative, and that’s annexation into Wyoming, especially for energy-rich counties like Moffat and Weld – both of which saw voters reject secession last year.

“I think frankly Wyoming would probably love Weld County and probably love Moffat County that are adjacent, but I think the issue is there’s a whole lot more to rural Colorado than just a couple of counties, so we have to come up with more of a systemic change,” Hare said.