Greatness is measured many different ways on a racecourse as daunting and technically demanding as the Birds of Prey.

Certainly its most enduring measure is tallied in victories and trips to the podium, but such success can be elusive, even for the greatest ski racers of all time. True, Austrian legend Hermann Maier claimed an astounding six wins on the Birds of Prey, and Americans Bode Miller and Ted Ligety – both of whom competed last weekend on the men’s Birds of Prey World Cup races – have won a combined eight times at Beaver Creek. 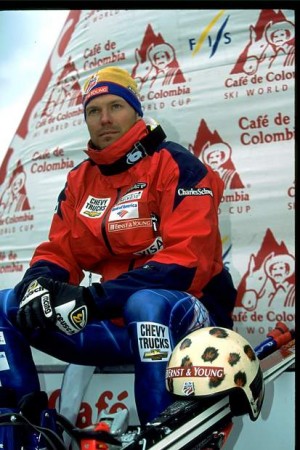 Chad Fleischer of Vail never quite broke through on the World Cup circuit or at the Olympics, but he recently made it into the Colorado Ski Museum Hall of Fame (file photo).

But Norway’s Kjetil Andre Aamodt, arguably the greatest ski-racing Olympian of all time with eight medals, never won on the Birds of Prey course.

For hometown hero Chad Fleischer, who grew up racing for Ski Cub Vail and was recently inducted into the Colorado Ski and Snowboard Museum’s Hall of Fame, Olympic and World Cup success was tough to come by, but one of his greatest career highlights came on the Birds of Prey course.

In the super-G race at Beaver Creek during the 1999 World Championships, Fleischer narrowly missed the podium by .28 seconds – leading for most of the race before being bumped by the likes of the legendary Lasse Kjus and Maier. Fleischer tantalized the massive partisan crowd but ultimately wound up sixth.

Similarly, the all-or-nothing Fleischer looked poised the win the sport’s greatest challenge in 1995 – the Hahnenkamm downhill in Kitzbuehel, Austria. Nearing the finish line and in the lead, Fleischer crashed off a jump in spectacular fashion, forever cementing himself in the annals of the Super Bowl of ski racing.

Coming close on the Hahnenkamm and flaming out in a blaze of glory is nearly as momentous as actually winning the race. While Miller has won the combined event in Kitzbuehel, Daron Rahlves (2003) and Buddy Werner (1959) are the only two Americans who have claimed the downhill (and only Werner won on the full-length course).

Fleischer’s best World Cup result ever was second place in the downhill at the 1999 finals at Sierra Nevada, Spain, a result that – along with his World Championship performance at Beaver Creek that same year – earned him Ski Racing Magazine’s Alpine Skier of the Year.

But his flameout at Kitzbuehel remains emblazoned on his brain (and body). “I still feel that crash every day, believe it or not,” Fleischer, 41, joked at his Hall of Fame induction.

Originally from Columbus Nebraska, Fleischer’s family relocated to Vail when he was 10. “We were one of the best damn families of Nebraska skiers at the time,” Fleischer said.

Not yet a racer, Fleischer was 12 when he snuck into Cyrano’s bar in Vail and watched downhill bad boy Bill Johnson win a World Cup in Wengen, Switzerland, and later that season claim the first gold medal ever for an American in downhill at the 1984 Winter Olympics in Sarajevo, Yugoslavia. That’s when Fleischer knew he wanted to be a downhiller.

His skill level didn’t quite match his ambition at the time, so Ski Club Vail started him out in the technical disciplines of slalom and giant slalom. But Fleischer quickly ratcheted up his speed-event skills.

“Chad was known as a spectator’s favorite throughout his career,” said former Ski Club Vail Executive Director Erik Steinberg, who nominated Fleischer to the Hall of Fame. “That is a polite way to say that Chad was upside-down, in the nets and head-over-heels as often as he was on the podium.”

Fleischer retired in 2003 after multiple surgeries and many months of rehab in the wake of a crash at Wengen (where Johnson won that first American downhill) that cost the Vail racer a shot at his third Olympics in 2002.

He then got married, moved to Steamboat Springs, opened Fleischer Sport and has been tirelessly giving back to ski racing ever since, raising money for youth athletics, promoting racing as a TV broadcaster and generally serving as an ambassador for going fast.

“Chad showed us the brash, daredevil style for which he will be remembered,” said fellow Steamboat resident and Olympian Billy Kidd, “and at the same time gave back to younger racers and the general public through various charitable events.”

Throughout all the crashes, surgeries and rehabs, Fleischer – who at one point dyed his hair in a leopard-spot pattern — never let his love of life or the sport diminish, summing up his philosophy in one simple mantra: “Snow is my church, and the mountain are my gods.”