The NBA season gets under way tonight with a doubleheader that includes Derrick Rose and the Chicago Bulls at LeBron James and the Miami Heat and Chris Paul and the Los Angeles Clippers at the Los Angeles Lakers minus Kobe Bryant, who’s still recovering from a torn Achilles tendon last season.

Hall of Fame NBA big man Bill Walton came to the Vail Valley last summer to tout a nonprofit group that’s spearheading new spinal surgery techniques Walton credits with saving his life. He also talked a little hoops with RealVail.com, previewing some of the teams he’s following in the NBA this season – especially squads he played for during his storied professional career. 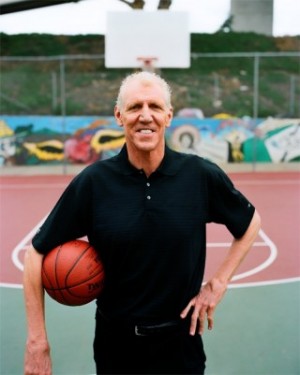 Walton did not have much to say regarding the Denver Nuggets, who don’t get started till Wednesday night (Oct. 30) in Sacramento against the Kings. Denver’s first home game in the post-George Karl era (with new coach Brian Shaw) is Friday (Nov. 1) against the Portland Trail Blazers – a team Walton led to an NBA title in 1977.

“The Blazers are rebuilding and we’re most hopeful there, but the NBA, you win with talent, and the teams that are struggling, they need better talent,” said Walton, who won an MVP with Portland in 1978. “[Point guard] Damian Lillard is an outstanding young talent for the Blazers there, but they need more and better players.”

After leaving the Blazers, Walton played for his hometown San Diego Clippers, which later relocated to Los Angeles. Walton says things will be interesting there this season with new coach Doc Rivers, who left the Boston Celtics after last season.

“The Clippers, that’s a most interesting team, and Doc Rivers has proven to be one of the great leaders of this era, and with Chris Paul and Blake Griffin and a ton of other guys, they look good,” Walton said. “I’m very happy for Ralph Lawler, the Clippers broadcaster. He’s my best friend. No one has seen more bad basketball in the history of the world than Ralph Lawler, and I’m really happy for him and I’m really happy for all the loyal Clipper fans. The sun is shining now.”

Walton engineered a trade out of San Diego and landed with the Celtics, where he won a Sixth Man Award and another NBA title in 1986 in a supporting role with players like Larry Bird, Robert Parish, Kevin McHale and Danny Ainge (now president of basketball operations for the rebuilding Celtics).

“[The Celtics] ran the table with what they had,” Walton said, referring to the team that won the title in 2008 and got there again in 2010 before falling to the Lakers in seven games. “To put it in the context of spine health, life is always about what’s next, and they did fantastic with KG [Kevin Garnett] and Paul Pierce and Ray Allen and Doc Rivers, but that’s over and so – in the world of challenges – you figure things out and then you go get the job done.

“And to do that you have to have your health, and so the Celtics are getting healthy now with new young talent, a new young coach [Brad Stevens], starting over, and the Celtics will be fine. Danny Ainge is tremendous. We have ultimate respect and confidence in him and they have great ownership there and now they just have to develop the new talent – the same challenge that the Portland Trail Blazers have.”

Garnett and Pierce have moved on to the Brooklyn Nets, while Allen won another championship last season with the Miami Heat, hitting a critical shot to extend the series to a seventh game.

“Right now, the talent in the East is in Miami and in Brooklyn, and the talent in the West, it’s still undetermined where that is,” Walton said. “San Antonio was so close [to beating Miami in the Finals], and we’ve all been where you have it and you let it go and you never get that moment back. A then Oklahoma City, will they be able to get it going again? The Clippers? Houston, how good will they be?”

The Houston Rockets landed the biggest off-season acquisition over the summer, stealing center Dwight Howard away from the Lakers.

“LeBron, Dwight Howard, these are good dudes, these are good guys, and they’re tremendous players. And we want the best for them and we want …  Dwight Howard to recover and get back to that level of incredible brilliance and dominance,” Walton added, referring to Howard’s back problems last season. “He’ll be fine.”