In February of 1968, when she was younger than Mikaela Shiffrin is now, Kiki Cutter became the first American ski racer to win a World Cup event.

Just two years later, after the 1970 World Alpine Ski Championships at Val Gardena, Italy, Cutter retired at the age of 20 with five World Cup victories – the most wins by an American for nearly a decade.

“I did [retire] very young,” said Cutter, a member of Colorado Ski and Snowboard Museum Hall of Fame. “But I wanted to continue my education and I couldn’t very well do that while I was racing. My family was not a wealthy family, and it was an expensive sport. I didn’t see a future in ski racing.” 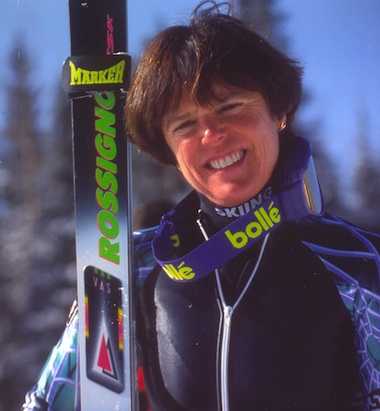 Kiki Cutter, formerly of Aspen, was the first American to win on the World Cup circuit in 1968.

Shiffrin, on the other hand, recently turned 19 after an incredible two-year run that’s included an Olympic slalom gold medal, a slalom world championship and nine World Cup victories. The sport’s new superstar, who calls Eagle-Vail home, plans to keep training for next season while studying for the SAT tests and eventually taking college courses.

“No, it’s not crazy talk at all. I’ve definitely thought about that, but each time I think about it I’m like, ‘Nope, I’m not done yet,’” said Shiffrin, speaking on a call coordinated by pasta sponsor Barilla, promoting its new “Share the Table” family dining campaign. It would be too hard to take significant time off for college and come back at the same competitive level, Shiffrin added.

“I have quite a few more things I want to accomplish in ski racing. I know there’s more I want to do and more I can make of the sport, too – not just for myself but for the rest of the world,” Shiffrin said. “I want to get ski racing out there and I want to make it to the next Olympics and see how many medals I can win there if I can win any.”

Shiffrin, unlike Cutter, has the option to do both because of the way the sport has changed so much in 40-plus years. Strict amateur rules prevented racers from taking sponsorship cash in the late 60s and early 70s – one of the reasons Cutter’s ex-husband, U.S. Ski Team founder Bob Beattie, split away from the World Cup circuit he helped establish in 1966 and launched a men’s pro tour.

“We were not making anything [on the World Cup circuit],” Cutter said. “If we had been making the money – not even that they’re making now – but even 10 years ago, I probably would have stayed on. I had a great future in ski racing.”

Married to Beattie from 1968 to 73, Cutter raced for a few years on the women’s pro circuit but admits “there wasn’t a lot of money in women’s pro racing, although it was a ton of fun.” Now 64 and living in New Hampshire after three decades in Aspen and another 10 years in her hometown of Bend, Ore., Cutter would have liked a few more years on the World Cup circuit.

Cutter went on to great success in the ski industry, working with Rossignol and establishing both a celebrity ski fundraising event and a youth scholarship program in Aspen, but it’s clear the competitive juices were still flowing when she retired in 1970. She said at the time the Europeans enjoyed a huge advantage compared to today.

“Over there skiing’s a national sport and they’re heroes,” she said. “They’re like our greatest football stars or basketball stars or baseball stars and they were subsidized by their countries. It’s amazing that we even did as well as we did against the Europeans.”

Those changes have allowed athletes like Bode Miller to contemplate sticking around for another Olympic run in 2018 (for what would be his sixth Games) after just becoming the oldest man to win an Olympic medal in Sochi. In that way, many current World Cup records have to be viewed through the prism of longevity owing to financial security.

“I’m a little bit torn because I don’t want to beat her records because she set them and people should know that forever, that Lindsey Vonn set these record in the U.S.,” Shiffrin said. “She was the first person to really show people what ski racing is, because it’s kind of a dying sport right now and she’s the one keeping it alive. I just hope to kind of run alongside her and her and help keep it going – to do my own part to keep this sport alive and inspire other athletes.”

Cutter thinks Shiffrin can do anything she sets her mind to.

“She is mature beyond her years, and I think her parents have done a great job with her,” Cutter said. “She races for herself. She loves it, and with that attitude she will continue to dominate. I don’t know if the pressure will ever get to her because she thoroughly enjoys what she does.”