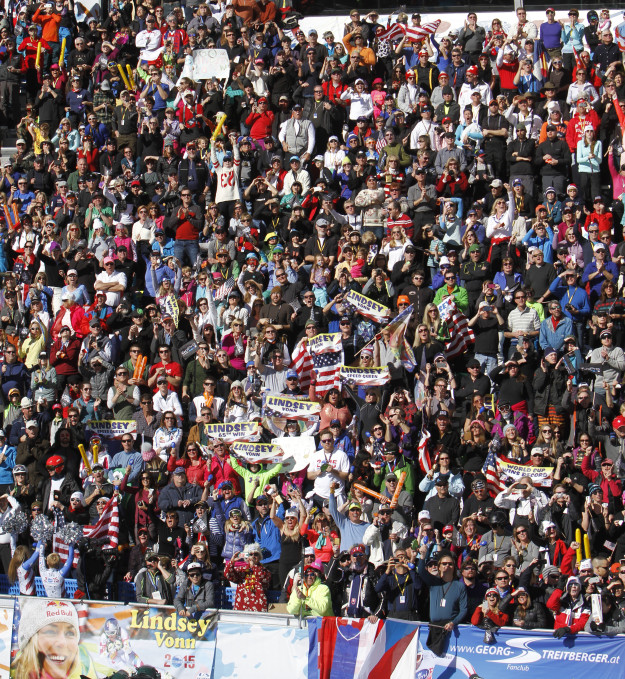 The stands have been packed with a mostly partisan crowd pulling for Americans at the 2015 Alpine World Ski Championships in Beaver Creek (Matt Inden photo).

Eagle-Vail’s Mikaela Shiffrin has been waiting for this moment all her young life — the chance to do what she does best in front of her hometown fans.

After a warm-up Tuesday in the Nation’s Team Event at Vail, it’s now time for the real deal with today’s women’s giant slalom on the bottom of Beaver Creek’s Birds of Prey course. The first run is at  10:15 a.m.,and the second run is at 2:15 p.m.

To be clear, GS is not Shiffrin’s strongest event — that would be the slalom on Saturday — but she has a realistic medal chance. So does Slovenia’s Tina Maze, who’s trying to match Norway’s Lasse Kjus with the record of five World Championships medals that he earned at the 1999 Worlds in Vail-Beaver Creek.

Maze has won three medals so far (two gold) these Championships, and is a dominant GS skier. She’s won the event 14 times in her stellar career on the World Cup circuit, including in December in Are, Sweden.

Shiffrin won the season-opening World Cup GS in Soelden, Austria, in October — the only GS win so far among her 11 career slalom victories. And last year at the 2014 Sochi Winter Olympics Shiffrin was fifth in the GS, just off the podium (top 3) in a race won by Maze.

Maze won the silver in the event at the 2010 Vancouver Winter Olympics, behind Germany’s Viktoria Rebensburg of Germany, who’s also in today’s field. And so is dark horse Julia Mancuso of Squaw Valley — the GS gold medalist from the 2006 Torino Winter Olympics.

This will also be the final race of these Worlds for Vail’s Lindsey Vonn, a three-time career GS winner on the regular World Cup circuit, but not since a knee injury derailed her career two years ago in Schladming, Austria. With a bronze in super-G last week, these Worlds have been disappointing for Vonn.

Her boyfriend, golfing great Tiger Woods, is in Beaver Creek to watch Vonn’s final race of these Worlds — a day after announcing he’s taking some time off on the PGA Tour to get his game in order and recover physically.

Shiffrin, on the other hand, is just stoked to be on home snow at this time of the year.

“I’m really excited for World Championships,” Shiffrin said. “I don’t come home during the season normally. I just stay right over in Europe from December until March, so coming home in February and doing my job, coming to the World Championships, that’s going to be really incredible. And competing in front of the home crowd, on home soil and the snow that I know and the mountains that I love, I’m really, really excited to come back to Vail-Beaver Creek.”

The Worlds are wrapping up over the course of the next four days.

Then it’s Shiffrin signature event on Saturday, with the first run of women’s slalom at 10:15 a.m. and the second run at 2:15 p.m. The 19-year-old who turns 20 next month is the defending world and Olympic champion in slalom.

All the races are free and open to the public. Go to the official website for more information.