As the world mourns Saturday’s deadly assault on a synagogue in Pittsburgh and the nation still grapples with a wave of politically targeted pipe bomb attacks, there was a reminder last week that hate is alive and well in a seemingly serene and accepting place like Eagle. 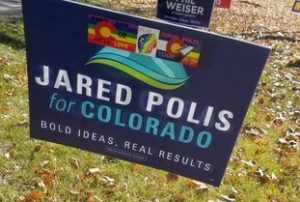 While prominent Democrats prepared to pass through town for a bus-tour and campaign stop on Friday, local Democratic officials were scrambling to remove homophobic bumper stickers aimed at Democratic gubernatorial candidate Jared Polis, a gay Jewish man who is married with two young children. Polis, who was on the recent bus tour, is also a U.S. congressman.

Plastered to his campaign yard signs around Eagle, and those of other Democratic candidates, the bumper stickers read, “Don’t vote for Jerod [sic] Polis or he’ll love your ass”. A Polis campaign spokeswoman declined to comment.

“It’s disturbing to know there are people in our community who feel empowered to spread hate speech like this,” Harrison said, adding that one of the bumper stickers was also recently spotted in Vail.

Dylan Roberts, a Democrat who represents Eagle County in the state legislature, had one of his yard signs defaced by the Polis bumper sticker in Eagle. Roberts, an assistant district attorney who lives in Eagle, was appointed to his current seat and is running for election on Nov. 6.

“I find it sad that someone feels this is how to voice disapproval with certain candidates. My cell phone and e-mail are published in many places and I am always available to talk to residents of Eagle County — whether they support me or not,” Roberts said. “However, the message on the bumper stickers is vile and offensive to all LGBTQ Coloradans and their allies.”

Roberts called for unity and healing in the current state of divisiveness.

“I am proud to be endorsed by groups like One Colorado because I have and will always support equality for all Coloradans,” Roberts said. “If that support is what this individual is upset about, I suppose I cannot help him. This kind of divisiveness is exactly what is wrong with our politics right now. We have to be better than this.”

Roberts said he received an email with the same message as the bumper sticker in mid-September. That information has been passed on to Eagle police.

Sanders added that the crime of defacing political yard signs is misdemeanor criminal mischief but that in this case it would also be filed with an enhancer that makes it a more serious matter.

“We do consider it a bias-motivated crime and that can fall into a lot of different categories,” Sanders said. “This case we have a particular bias. We understand that Mr. Polis is openly gay, and based on the content of the bumper stickers right now, we believe it’s a bias-motivated crime.”

Sanders said he understands the stickers may be showing up in other places in the Vail Valley, although he had not yet heard from other police departments as of Tuesday morning.

“It sounds like it is kind of creeping around the valley in a couple different places,” Sanders said.

Polis, a Boulder resident, has represented the eastern third of Eagle County, all of Summit County and a large swath of the northern Front Range in Congress for the past 10 years. He’s now running against Republican Walker Stapleton in a bid to replace term-limited Democratic Gov. John Hickenlooper.