The two Democrats vying to replace Republican U.S. Rep. Scott Tipton in Congress this November weighed in on the latest school massacre Wednesday in Parkland, Florida. Tipton, who represents part of Eagle County in Congress, remained silent on both his official congressional website and social media as of Friday morning.

“As I sit here in my living room with my husband and best friend, Michael, I am reminded of how lucky I am that the people I cherish and love are happy, healthy, and safe. Unfortunately, that is not the case for everyone today,” Mitsch Bush wrote on Wednesday.

“We don’t have all the details and background yet, but we do know that a young man entered his former high school in Parkland, Florida today and murdered at least 17 people with an AR-15 semi-automatic rifle. We cannot become numb to these ever-increasing mass shootings in our country.”

Mitsch Bush, who quit the state legislature to seek the Democratic nomination to challenge Tipton for the vast 3rd Congressional District, which includes part of Eagle County and most of Colorado’s Western Slope, went on to call for congressional action.

“Classrooms should be havens of opportunity and personal growth — a beacon for the future. We must come together as a nation to demand real solutions,” Mitsch Bush said. “I don’t pretend to have all the answers to this national crisis, but I do know that it’s time for the U.S. Congress to put aside partisan bickering, buck their big donors, and come together for rational, evidence-based solutions like Colorado’s universal background check system.”

Carbondale’s Karl Hanlon, an attorney also seeking the Democratic nod, put out a statement on Thursday.

“We are failing our kids,” Hanlon wrote on Facebook Thursday. “This is the 18th time a gun has been fired on a school campus this year and it’s not even March. This is a national crisis. As a lifelong gun owner, hunter and sportsman, I care about the 2nd Amendment, but my belief in our collective right to bear arms does not impede my commitment to protect our children. We need to make Colorado’s universal background check law the nationwide standard.

“This is not simply a mental health issue, a gun issue, or a law enforcement issue. It’s a complex issue that we need to address at all levels, and it’s shameful that party leaders and the media cut this issue down to soundbytes. We need to have the hard conversation. At the end of the day, one thing is true: we are failing our kids. They deserve better.”

U.S. Rep. Jared Polis, whose 2nd Congessional District includes part of Eagle County and the small chunk of the Western Slope Tipton doesn’t represent, put out a statement Friday morning. Polis is seeking the Democratic nomination to run for governor in November:

“What happened in Parkland, Florida, this week is every parent’s worst nightmare. The thought of seeing our children off to school in the morning, only to get a call no parent should ever have to take: There’s been a shooting. Your child is gone.

“And yet the senseless slaughter continues: an elementary school in Connecticut, a church in South Carolina, a concert in Nevada, a movie theater in Aurora, and a high school in Littleton. Politicians continue to let us down and do nothing.

“It’s time for our leaders to drop the pretense that reducing gun violence is incompatible with honoring our 2nd Amendment Rights and show they aren’t scared by the army of lobbyists from gun manufacturers.

“We must honestly ask ourselves: what commonsense steps can we take to reduce these tragic acts of gun violence?

“For more than a decade, I’ve taken on the gun lobbyists and have been proud to vote for gun safety time and time again. We must continue our progress here in Colorado, even if the NRA controls Washington DC and continues to block the life-saving measures we so desperately need.

“That’s why we need both a national and a state action plan. To start, we must pass nationwide universal background checks, based on the model we passed here in Colorado, which has saved lives. We must do a better job getting weapons of war — that serve no legitimate sporting purpose — off our streets. We should ban bump stocks, devices designed solely to convert legal weapons into illegal weapons that can kill dozens of targets in less than a minute. And we should prevent those under a restraining order in domestic abuse cases from accessing guns.

“Condolences mean nothing, and are indeed hypocritical, if they do not spur us to action to prevent yet another tragedy. Thoughts and prayers are equally meaningless if they are followed by the cowardly silence of a complicit politicians and the smug smiles of gun lobbyists. It is time — it is long since time — to act.” 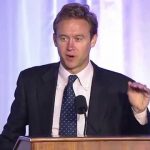 Democrat Mike Johnston, a former state senator and educator who grew up in Vail, tweeted in memory of the victims of the 1999 school shooting at Columbine High School in Littleton, Colorado:

These words are inscribed on our memorial to the 12 students we lost at Columbine High School. 19 years later, we have learned that lesson over and over. The question is whether we will have the courage to make change. pic.twitter.com/TgiZF5ZxUw