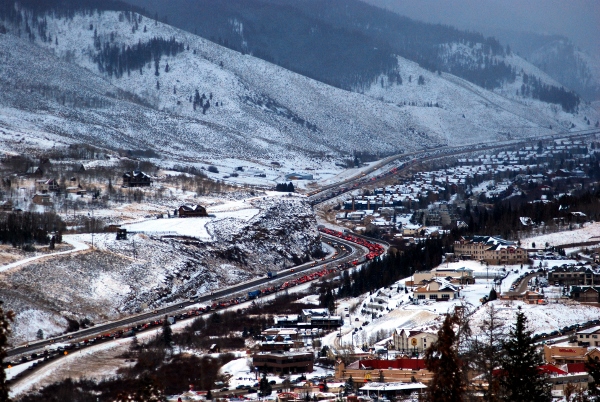 The senior Republican member of Colorado’s congressional delegation, Doug Lamborn, told The Colorado Statesman on Friday that the highway funding bill passed by the House on Thursday and lauded as a victory for new Speaker Paul Ryan is a bad deal for the country.

“Although there were many good things in the bill, the spending in the bill was not clearly defined and the full six years in the bill were not fully paid for – just the first three years – so I had some real problems on that part of the bill which caused me to vote no,” Lamborn said.

In fact, all four Colorado House Republicans voted against the $325 billion bill, which proposes spending $261 billion on highways, $55 billion on mass transit and $9 billion on safety measures over the next six years. It passed 363-64 and must be conferenced with a similar Senate version before heading to President Barack Obama’s desk before Thanksgiving.

“Secondly, I would strongly prefer we take gas tax dollars that the states collect, such as Colorado, and concentrate them on asphalt and concrete and bridges and not siphon off that money for what I consider extraneous purposes like mass transit, bicycle paths and highway landscaping,” added Lamborn, a Colorado Springs Republican.

Congress has not passed a long-term highway funding bill in about a decade, nor has it raised the 18.4 cents-per-gallon gas tax that funds the federal Highway Trust Fund since 1993. States have increasingly been passing their own funding measures and fuel taxes to bridge the gap.

“The states can do what they need to, but at this point I’m not favoring a federal gas tax increase,” Lamborn said, reiterating that state taxes should go to hard infrastructure projects such as bridge repairs and highway maintenance and expansion rather than bike paths and rail.

“I’m not saying those aren’t worthy projects, but let’s spend those apart from gas tax dollars,” he added. “When people go to the gas pump, they expect their dollars to go to the roads and not go off on bicycle paths, for instance. The gas tax dollars would do a lot better job of covering the needs for roads if we were able to concentrate more how they’re spent.”

All three Colorado House Democrats voted for the successful funding measure, which Ryan hailed as a prime example of the “more open process” the Wisconsin Republican brings to the House after replacing John Boehner as speaker.

Jared Polis, a Boulder Democrat, managed to amend the bill to designate Interstate 70 from Denver to Salt Lake City as a “Corridor of High Priority,” which would make the state eligible for certain federal maintenance and improvement funding streams along a stretch of highway Polis called “notoriously congested.”

High-priority transit corridors get special treatment when applying for grant programs like the Transportation Investment Generating Economic Recovery (TIGER) and Nationally Significant Freight and Highway Projects, according to Polis.

“Anyone who has sat in traffic on a Sunday afternoon on I-70 east knows that highway is in need of major improvements,” Polis said in a press release. “Traffic along I-70 has far outpaced our ability to expand and maintain it, and at this point Colorado can’t do it alone.”