Schild, a retired Austrian star, won the most slaloms ever on the women’s circuit with 35, but Shiffrin is now just eight behind her with 27.

Monday’s win was the sixth so far this season for Shiffrin, the defending overall champion who won 11 races last season. She has a realistic shot at surpassing Lindsey Vonn’s American record of 12 wins in a season and maybe even has her sights on Vreni Schneider’s all-time record of 14 wins in one season.

If Shiffrin continues her winning ways this week in Croatia, she will no doubt add to her sizable lead in the overall chase and could move past Schild into sole possession of sixth place on the all-time victory list.

It’s also not unrealistic to expect Shiffrin could also catch and pass fifth-place retired great Anja Paerson’s 42 wins later this season. Vonn, who lives in Vail, is the greatest women’s racer of all time with 78 victories.

OSLO, Norway (Jan. 1, 2018) – Mikaela Shiffrin (Eagle-Vail, Colo.) rang in a foggy start to the New Year with her 37th career FIS Ski World Cup victory in the city event dual slalom in Oslo, Norway Monday night. It was her second-career city event victory and her seventh World Cup win so far this season. 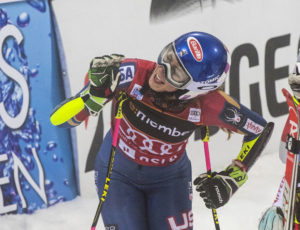 Competing on a tight dual slalom course covered in a blanket of fog, Shiffrin and Switzerland’s Wendy Holdener both entered the finals undefeated as Shiffrin took the first run by a slim 0.01-seconds. Shiffrin then took the second run by 0.17 seconds to remain undefeated for the evening while picking up another 100 World Cup points. Nineteen-year-old Melanie Meillard defeated Sweden’s Frida Hansdotter in the small final for her first career World Cup podium in third.

“For me, this is totally different than GS or slalom, or a traditional ski race because you have the person next to you. And I always know that my competitors really want to win – everybody wants to win,” Shiffrin said. “Especially tonight with Wendy, she is so hungry, and I have to think ‘OK, I have to be hungry too, and I have to be tougher and a little bit crazy.’ And it worked out really well for me. It’s not always that way … you have to really dig deep.”

With the victory, Shiffrin tied her childhood idol Marlies Schild, and is now sixth on the all-time World Cup win list at age 22.