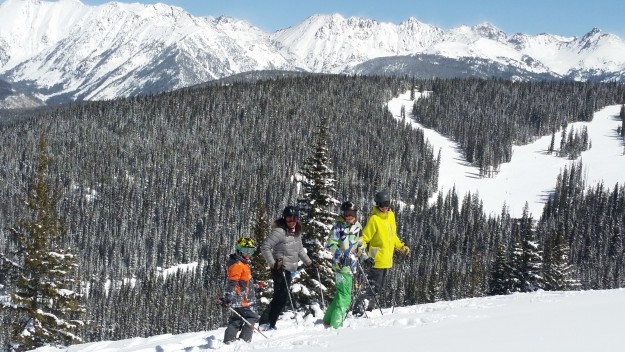 The Williams family gets ready to jump into Upper Snag Park at Vail on Sunday, where the powder was still deep after an Easter weekend storm (David O. Williams photo).

What an incredible Easter weekend of skiing. Great full-on powder feast at Beaver Creek on Saturday followed by cold temps and tasty powder leftovers at Vail on Sunday. And now forecasters are calling for yet another week of great snow starting Tuesday and lasting through Friday.

“Snow showers could produce a quick inch or two of snow on Monday and Monday evening,” Opensnow.com meteorologist Joel Gratz wrote Sunday evening. “Then a strong cold front will bring heavy snow, starting late on Monday night in the southern mountains and hitting all mountains on Tuesday and Tuesday evening. Additional snow will fall on Wednesday, then after a brief break, we should see one last wave of snow around Thursday afternoon or Thursday night. The best powder days will likely be on Tuesday, Wednesday, and either Thursday afternoon or Friday morning. Total snowfall during the week should be in the 10-20 inch range.”

That makes it three weeks in a row of high-quality later-winter and early-spring powder skiing after a very sunny and dry month of February and first couple weeks of March. Some of us are even getting a little sore from all the great powder skiing of late.

And it’s not too late to consider booking a last-minute trip, with the Eagle County Regional Airport in full swing. The facility 40 miles west of Vail will celebrate a major milestone on Tuesday. Here’s the press release from Eagle County:

The Eagle County Regional Airport (EGE) will welcome its 8 millionth commercial passenger on March 29. The milestone will be reached via one of the midday arrivals from Chicago, Denver, Los Angeles or Miami. All flights will be greeted by Beaver Creek cookie time chefs.