Why the battle for Bears Ears matters in Colorado 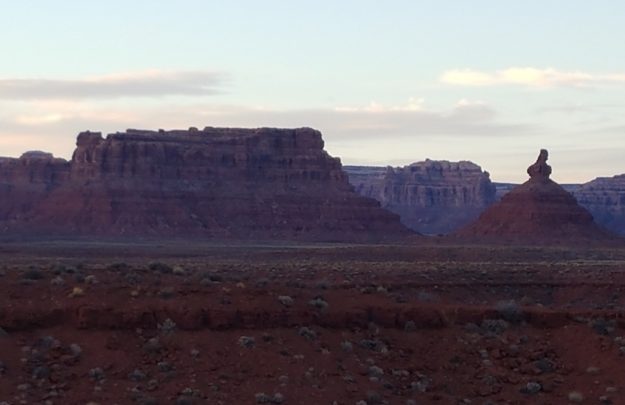 When I was in college in Denver from the mid to late 1980s, a friend and I did a road trip to Natural Bridges in southeastern Utah — the state’s first national monument. Years before that my folks had taken me camping near Hovenweep National Monument on the Colorado-Utah border.

I learned to appreciate the magic of these places at an early age.

After college, when I was working as a sports editor at the Vail Daily, my friend and boss, editor Andy Hood (now a European cycling writer for VeloNews), took me out to mountain bike for the first time in Moab — first at Slick Rock and then places like Gemini Bridges. Later we would backpack into the Needles District of Canyonlands National Park, exploring the wonders of Joint Trail and Druid Arch.

Since then I’ve hiked, biked and camped all over southeastern Utah, exploring Goblin Valley, backpacking with my wife around Upheaval Dome in the Island in the Sky District of Canyonlands, taking my boys winter backpacking in the Needles District, hiking and biking in Arches National Park. 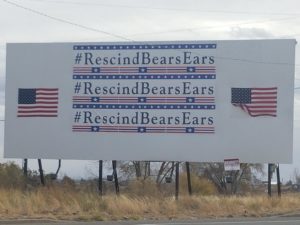 A billboard outside of Blanding, Utah (David O. Williams photo).

Now that my in-laws live in Tucson, we travel through Moab and then down through Monument Valley a couple of times every year. I always try to get the boys out into some new and amazing part of the southeastern Utah desert.

Just this past Thanksgiving we traveled back from Tucson and hiked in Monument Valley, watched the sunset in Valley of the Gods (currently in Bears Ears National Monument but recently proposed for downsizing by the Trump administration), stayed a night in Blanding, Utah, and then jogged over to Hovenweep.

I hope I’m instilling in my boys the same awe for these iconic places that my parents instilled in me to 30 years earlier. And I hope the money I’ve spent all over the region in those three decades helps in the preservation of these lands for future generations.

Here’s an article I wrote on the topic for Colorado Politics:

Heated public lands debate in Utah spills over into Colorado

BLANDING, Utah — A coalition of outdoor recreation businesses in Colorado plunged headlong this week into the bitter war of words between Republican lawmakers and clothing and gear manufacturer Patagonia over the shrinking of two national monuments in Utah.

The move highlights a growing push by Colorado’s outdoor recreation industry to use the more conservative public lands policies of Utah lawmakers to pull business away from the neighboring state. And Democratic Colorado Sen. Michael Bennet indirectly jumped into the fracas by sponsoring a bill this week to expand outdoor recreation opportunities on private lands.

In a press release entitled “Patagonia is not alone,” the Continental Divide Trail Coalition and the Colorado Mountain Club unveiled a letter signed by more than 180 small businesses and sent to Colorado officials urging the Trump administration to stop its ongoing review of national monuments that resulted in the downsizing of Bears Ears and Grand Staircase-Escalante in Utah.

The U.S. House Natural Resources Committee on Dec. 8 tweeted “Patagonia is lying to you: A corporate giant hijacking our public lands debate to sell more products to elitist urban dwellers from New York to San Francisco.” The tweet was apparently in response to Patagonia telling Americans President Donald Trump “stole your land” by shrinking the two monuments.

But U.S. Interior Secretary Ryan Zinke says it’s the other way around – that special interests have influenced previous presidents such a Democrats Bill Clinton (Grand Staircase) and Barack Obama (Bears Ears) to overreach via the 1906 Antiquities Act and restrict the wide variety of traditional multiple uses on public lands.

“The Antiquities Act is not a weapon for presidents to arbitrarily restrict the uses of hundreds of thousands of acres of land to prevent uses like timber harvesting and cattle grazing — ways of life for many American families and the lifeblood of many local economies,” Zinke wrote for CNN.

In Colorado, however, some business owners and politicians argue public lands should be used for less impactful outdoor recreation, while natural resource extraction should be more limited.

“It is critical that our Colorado congressional delegation stands up to efforts to undermine public lands like this,” said Salida Mayor P.T. Wood, owner of Wood’s High Mountain Distillery. “We have seen the benefits of permanently protecting Browns Canyon National Monument here in the Arkansas Valley, not only for our businesses, but in also knowing that this treasure will be preserved for future generations of all Americans to access.”

Wood’s business was one of more than 180 signing the recent letter to Colorado lawmakers. Other industries have also been outspoken on public lands protections in Colorado and Utah, including ski resort representatives whose companies operate on public lands.

“A big chunk of the decrease in the Bears Ears was to open to Kaiparowits Plateau up to coal mining,” said Auden Schendler, vice president of sustainability for Aspen Skiing Company. “If your decision-making is based on coal, which nobody wants and is uneconomic, and uranium, which also isn’t needed anymore unless we’re going to make a lot more nuclear weapons because it’s not going to be a part of the nuclear industry, which is dead, it just makes no sense.”

But Zinke argues multiple use means multiple use, and that responsible resource extraction has long been part of the management of federally-owned public lands throughout the West.

“Presidents have abused the Antiquities Act to lock up vast swaths of public land,” Zinke wrote. “The ‘smallest area compatible’ requirement has become the exception, rather than the rule, as public access, hunting and fishing, and use of private property are restricted. Often, these designations are made without the support of the people on the ground.”

Bears Ears was the first national monument created with full support from five Native American tribes in the area, where there are thousands of archaeological sites of the Ancestral Puebloan people.

“This is a big blow for tribes and locals who worked for years to make Bears Ears a reality,” former Ute Mountain Ute tribal council member Regina Lopez-Whiteskunk told reporters on a recent conference call. “Reducing the monument is culturally and economically harmful to local governments, tribes and the communities that are supported by the monuments.”

But Bishop, along with the rest of Utah’s all-GOP congressional delegation, fully supported Trump’s move. He called it a good first step to better protecting and managing public lands.

“The next steps will be to move beyond symbolic gestures of protection and create substantive protections and enforcement and codify in law a meaningful management role for local governments, tribes and other stakeholders,” Bishop recently told reporters.

Mary McGann, vice chair of the Grand County (Utah) Council and a Moab resident since the 1950s, says mining is boom or bust but the tourism generated by nearby national parks like Canyonlands and Arches provides consistent economic benefit to local communities. She also feels the Trump administration action was racial in nature, aimed at the local tribes.

“This is the first time that the Native American tribes have been actively involved in the creation of a national monument, and presently, when our president is under scrutiny for his statements that were racially charged for our Native American tribes, I think it’s foolish of his department to even be considering doing this,” McGann said on a conference call, referring to comments Trump made about Sen. Elizabeth Warren late last month.

The VPA-HIP provides grants to states and tribal governments to incentivize private landowners to voluntarily open their lands for public use. Colorado has enhanced wildlife habitat through the program that provides walk-in access for sportsman while protecting private property rights.

“This program has rewarded Colorado’s farmers and ranchers for providing new opportunities for the next generation of sportsmen and women and improving wildlife habitat across our state,” Bennet said in a release. “As we work on the next Farm Bill, we’ll continue to prioritize funding for this successful program.”

Bennet was also a direct critic of Trump’s shrinking of Bears Ears and Grand Staircase, tweeting earlier this month: “Earlier generations would be disturbed to know that their legacy of protecting wild and sacred places is under assault by @POTUS and his administration. We will fight this attempt every step of the way.” He included the hashtag #StandWithBearsEars. 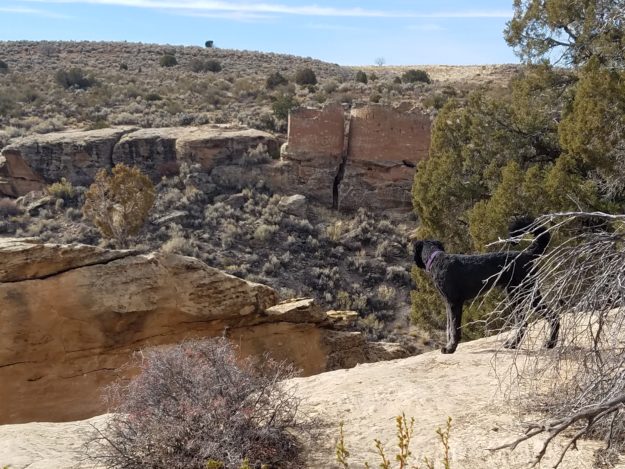