While this week has been dry, sunny and spectacular — perfect for peak leaf-peeping season this weekend and next – change is on the way, and the calendar shows ski season in Colorado is likely less than a month away.

That’s right, even though it’s not yet officially even fall (that happens on Sept. 22), ski areas such as Arapahoe Basin and Loveland will likely start blowing snow by the end of the month, and one or both will undoubtedly be open for business by the middle of next month. 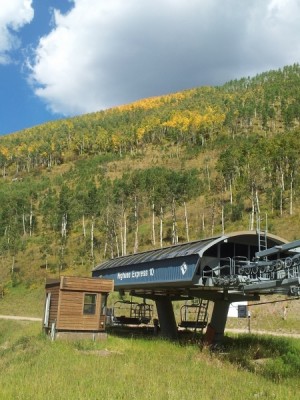 The last two seasons, A-Basin won the race to open first in Colorado by opening on Oct. 13 last year and Oct. 17 the year before. Loveland followed closely behind on Oct. 17 and Oct. 23 respectively.

Local and nearby ski areas, by comparison, won’t open until the following month – with Keystone eerily opening on Halloween, Friday, Oct. 31, Breckenridge on Friday, Nov. 7, Vail on Friday, Nov. 21, and Beaver Creek the day before Thanksgiving on Wednesday, Nov. 26.

Still, turns can be had less than a month from now an hour or so away high on the Divide at either Loveland or A-Basin.

“The weather [this] week looks a bit warmer and drier,” A-Basin COO and VP Alan Henceroth wrote recently on Al’s Blog. “We will be ready [for snowmaking] when than first cold snap hits towards the end of September.”

Meteorologist Joel Gratz of Opensnow.com wrote this morning that this week’s classic Colorado fall weather starts to turn toward the end of this weekend.

“A few more showers on Friday (but not many), then Saturday will be mostly dry and the much nicer day of the weekend,” Gratz wrote. “Sunday through Tuesday will be showery for most of the state, then one or two colder systems could affect Colorado sometime between Friday the 26th and Tuesday the 30th.”

Sounds like possible snowmaking weather, but it could put a quick damper on fall foliage viewing.

And once all those shimmering aspen leaves settle on the forest floor, the real question for avid snow riders is will we see a repeat of last season’s stellar snowfall totals that allowed Aspen and other ski areas to extend ski season into May and June last summer?

For answers to that question, one may want to look to the Farmers’ Almanac, which is predicting another record-breaking winter for some parts of the country, or, you may not, according to Gratz, who largely discounts long-range forecasting:

“Since I see no track record of accuracy from the forecasts produced by the Farmers’ Almanac and the Old Farmer’s Almanac, I have zero confidence in their forecasts for the upcoming winter,” Gratz wrote earlier this month.