Vonn wins bronze in super-G as Woods looks on 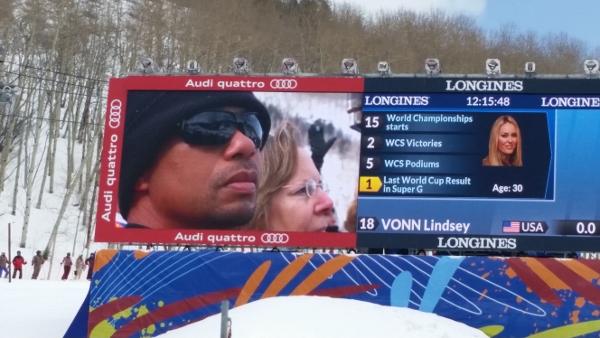 Tiger Woods cheers on Lindsey Vonn on the Jumbotron Tuesday during the women’s super-G at the 2015 Alpine World Ski Championships at Beaver Creek (David O. Williams).

Vail’s Lindsey Vonn thrilled her hometown crowd by starting 18th and skiing into first-place position in the women’s super-G at the 2015 Alpine World Ski Championships on Tuesday. Then the very next racer, Slovenia’s Tina Maze, took the air out of the packed finished stadium by bumping Vonn to second.

A couple racers after that, Austria’s Anna Fenninger turned in a flawless run to take both Maze and Vonn down a notch. Fenninger won with a time of 1 minute, 10.29 seconds, Maze was three-hundredths of a second back at 1:10.32, and Vonn finished third with a time of 1:10.44 — a little over a 10th of a second out of first.

For Vonn, who crashed and blew out her knee last time she raced in a World Championships super-G in 2013, the third-place result will be bittersweet. She’s come all the way back to the top of her sport, but she clearly wanted gold in front of her Vail Valley fans.

“I’m really happy with the way I skied today,” Vonn said, according to the FIS. “It was really tough conditions. But to come away with a medal at my hometown World Championships is something really special.

“I just wish that the weather was a little bit better,” Vonn added, according to the U.S. Ski Team. “I definitely had a pretty strong headwind right out of the starting gate and for the first couple of gates. I was already three tenths out in the first 20 seconds; it’s a little hard to make up that time.

“I fought my way down. On the bottom part where there wasn’t any wind, I was pretty fast. I’m hopeful that for Friday there will be good weather, so I just want a fair race and a chance to get on the podium.”

Vonn added that nerves were somewhat of a factor.

“I was a little bit nervous; I felt like I had it under control. I maybe was a little stiff in the first couple of gates and a little round, but that’s nitpicking. I thought I skied well and I was clean. A couple gusts crossed me, but at the same time, Anna [Fenninger] skied very well, and I’m very proud to be on the podium with those two. ”

Fenninger said she had no idea how Vonn and Maze had done when she came down 21st.

“I only watched about the fist 10 racers,” Fenninger said. “I didn’t know what Lindsey or Tina or any of the others had done; I just focused on me and what I had to do and it worked.”

Maze was happy with her silver in the tough conditions.

“I couldn’t have skied any better than I did today,” Maze said. “The weather was always changing and it was hard, but I am proud of how I did and I know I could not have done any better.”

Vonn’s boyfriend, golfing great Tiger Woods, cheered her off from the finish stadium, but it wasn’t enough to overcome a wind gust that cost her time early in her run. Weather was a factor all day, with new snow and wind forcing a 40-minute race delay.

Vonn’s bronze medal, an American record sixth of her career, bodes well for the women’s downhill, which is scheduled for Friday at Beaver Creek. Vonn will clearly be motivated to improve on her result.

Vonn won double World Championships gold in downhill and super-G in Val d’Isere, France, in 2009, and two downhill silvers (Are, Sweden, in 2007 and Garmisch, Germany, in 2011). She also won super-G silver in Are. Tuesday’s result was her first bronze at the Worlds.

Ligety and Miller have a shot at matching Vonn’s six-medal mark when the men’s super-G continues the action Wednesday at 11 a.m. The races are free and open to the public. Go to the 2015 Worlds website for more information.