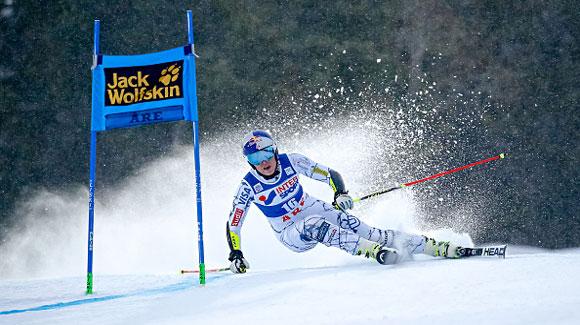 Vail’s Lindsey Vonn won her four straight World Cup race on Saturday, and the 71st of her career, claiming a giant slalom in Are, Sweden, but her teammate and fellow Vail Valley resident, Eagle-Vail’s Mikaela Shiffrin, injured her knee in training and did not race.

Vonn built her lead in the overall chase to 400 points compared to 296 for Shiffrin in second place. Shiffrin posted her condition on social Instagram:

“Here’s an update- I fell during free skiing on the race hill and I’m waiting for an MRI this afternoon to see what’s going on.. Cross your fingers and get psyched to watch the second run for the men in Val D’isere and women here in Åre. @lindseyvonn is in the lead so cheer hard for her! As she would say – #youcantslowmedown 😝”

Vonn went on to win in dominant fashion, her first GS win since January of 2013 and only the fourth of her career.

Shiffrin wrote on Facebook later in the day: “I am flying home tomorrow for a complete evaluation. I have at least MCL injury and bone bruising, hopefully no additional injury. Full diagnosis and recovery predictions after I’ll see a doctor at home.”

Here’s the full press release on Saturday’s race from the U.S. Ski Team:

Shiffrin pulled out of the race with a possible right knee injury sustained during the morning warm up. As a precautionary measure, she is being evaluated further. She has actively engaged in talking about it on her social media.

High winds forced race officials to push the start down to the reserve location – eliminating several gates from the course – as well as causing a 15-minute delay.

“I love racing here in Are under the lights,” Vonn said, who won the Are GS in 2012. “This is my second GS win here. It’s just been a great season so far, and congratulations to all the other racers as well – so happy.”

Behind Vonn, Austria’s Eva-Maria Bren was second and Italy’s Federica Brignone rounded out the podium in third at 0.35

QUOTES
Lindsey Vonn
I am so happy. Thank you so much to everyone for coming out. I love racing here in Are under the lights. This is my second GS win here. It’s just been a great season so far, and congratulations to all the other racers as well – so happy.

I tried to be smart on the bottom where it was turny and some of the girls had some trouble. I think I may have given away too much time there, but still I was attacking the whole time trying to arc and I was fast.