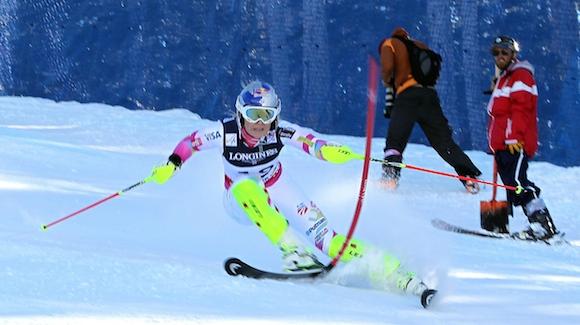 Lindsey Vonn straddles a gate and skis out of the slalom in the alpine combined (Getty Images-Agence Zoom/Christophe Pallot).

BEAVER CREEK, Colo. — Slovenia’s Tina Maze turned in the fastest time in the alpine combined downhill Monday morning, then backed it up with a smoking run of slalom to claim her third medal in three events at the 2015 Alpine World Ski Championships

Hometown favorite Lindsey Vonn of Vail was seventh after the downhill but straddled a gate in the afternoon slalom and was disqualified.

“I’m just really disappointed,” Vonn said. “It’s a hometown World Championships and I really tried as hard as I can. I came up short and that’s disappointing for myself and to my family and my fans. I just didn’t figure out this hill at all. Especially in terms of today, because I actually skied really good slalom the last two days and I thought I had a chance of getting a medal.”

Vonn is coming off two knee surgeries the last two years but seemed to be back in form with five World Cup wins so far this season. So far the World Championships in her adopted hometown haven’t gone her way, netting just a bronze in last week’s super-G.

“I’m going to try to forget today as fast as possible and move on to the next race,” Vonn said. “I’m going to try and take tomorrow off, get my knee rested and hopefully get ready for GS. The ice this morning took a toll on my knee. I really tried hard today, but it hurt a lot. It is what it is.”

Thursday’s GS is Vonn’s last hope at a medal, and Maze will be gunning for her fourth medal of these Worlds and her 10th Championships medal overall.

Vonn hoped to charge out and win the downhill by a wide margin but couldn’t get a feel for the rock-hard Raptor course in the morning run.

“I just didn’t feel like I had any grip whatsoever,” Vonn said after the downhill. “I hit a rock. It’s hard to hold an edge when you have no edge! But I tried my best. This ice just doesn’t feel good on my knee. It’s pretty sore.”

The rest of the U.S. women’s team didn’t fare much better.

The action shifts to Vail on Tuesday with the team event at Golden Peak. All races are free and open to the public. Go to the official website for more information.