Forgoing surgery on a partially torn ligament in her right knee to race in this weekend’s women’s World Cup at Lake Louise, Canada, is a clear sign of just how driven Lindsey Vonn is to break every record in the book. 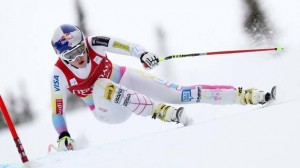 Less driven athletes might have had the anterior cruciate ligament (ACL) in their right knee surgically repaired again, sat out the season and come back stronger next year. But Vonn makes it very clear she has goals this season, not the least of which is winning another gold medal at the Winter Olympics in Sochi, Russia, in February.

On Wednesday, just two weeks after a training crash at Copper Mountain re-injured the same knee she completely blew out in a crash at the World Championships in Austria last February, Vonn finished 22nd in a downhill training run at Lake Louise. Today (Thursday), she skipped the training run and decided to race in the downhill Friday at Lake Louise on a track where she’s won 14 of her American record 59 World Cup races.

“You know if your body is ready or not and I know that mine is ready,” Vonn said. “Normally this is the first downhill of the year, so for me this feels like a normal beginning of the season. It feels pretty awesome. Lake Louise has always been really good to me and that’s why I really wanted to come back here.”

Vonn originally wanted to come back in time for a women’s World Cup last weekend at Beaver Creek, where the U.S. women’s speed team struggled and Switzerland’s Lara Gut dominated. But her Nov. 19 crash kept Vonn from returning on home snow on a more demanding Raptor course that will host the 2015 World Alpine Ski Championships.

Vonn said it also made sense for her to skip the second training run at Lake Louise today.

“My goal [Wednesday] was to ski solid and to ski my race line and I did that,” Vonn said. “I knew that if I could accomplish all those things in one run, then I don’t need a second run. It’s the smart choice for me to not ski today in order to prepare for tomorrow.”

Vonn, 29, is just four World Cup wins shy of breaking the all-time women’s victory mark of 62, held by retired Austrian great Annemarie Moser-Proell, and that’s one of her motivations for returning to action this season.

“It would be really great to be able to get those four wins this year, but I’m not expecting it and that’s not my focus,” Vonn said at a press conference in Vail on Nov. 8. “My focus is definitely on Sochi. I want to be able to win on the World Cup before I get to Sochi. Obviously, I want to go into Sochi with confidence, knowing that I can win …”

The former Ski Club Vail racer also said the men’s all-time mark of 86 wins, held by Swedish legend Ingemar Stenmark, is still within the realm of possibility, although not her primary focus.

“Right now I’m just focused on this season, and if it goes well, if things are coming along and I continue to ski fast, I think if I average nine or 10 wins a year, [Stenmark’s record is] possible, but that is really hard,” Vonn said. “I realize I’ve done it in the past for a few years, but it takes a lot out of you. It’s possible statistically, but like I said it’s not my goal right now.”

Sochi remains all-consuming for Vonn, who is the only American woman to have claimed downhill gold (at the 2010 Vancouver Winter Olympics) and very badly wants to repeat. Only one other woman, Germany’s Katja Seizinger, has won back-to-back Olympic gold medals in downhill (1994 and 1998).

But Vonn is also intent on racing at the 2015 World Championships next season on her home mountains at Vail and Beaver Creek. Speaking to reporters in Vail last month, Vonn was asked what would mean more, a gold medal in Sochi or a world championship at home next season.

“Oh, that’s a hard one,” she said. “I would say it would probably mean more to me to win the world championship at home because I’ve already gotten the Olympic gold medal in Vancouver, and obviously I want to win again in Sochi, but I think… I’m lucky just to be given the opportunity to race at home. That would probably mean the most to me.”

Vonn also addressed her career after the 2015 World Championships.

“[Worlds have] been my long-term goal for so many years and I’ve always said that after 2015 I’ll re-evaluate and see where I am mentally and physically and if I’m still enjoying it,” Vonn said. “If I am, then I’ll keep racing, but if not that could be a good time to retire.”

“But I don’t foresee that happening. I foresee myself competing for a long time. I think this injury has only motivated me to continue racing longer, and I feel that there’s a lot more that I have to accomplish.”

Starting with Lake Louise this weekend on a course she has owned for a decade.