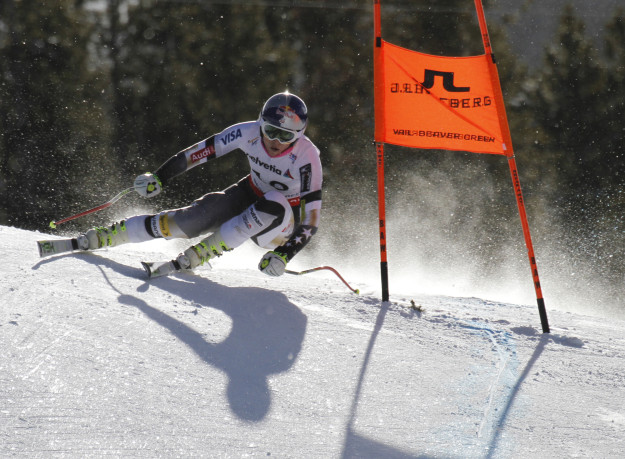 Lindsey Vonn has one more slim chance at a medal in the 2015 Alpine World Ski Championships — in Thursday’s giant slalom (Matt Inden photo).

I was bummed to see Lindsey Vonn so bummed Monday after she DQ’d in the slalom leg of the women’s alpine combined event after finishing a distant seventh in the downhill leg.

She was very emotional in her post-race TV interview, and clearly the pressure of racing for her hometown fans and “only” having a bronze in super-G to show for her efforts so far had gotten to her.

“I’m just really disappointed,” a tearful Vonn said. “It’s a hometown World Championships and I really tried as hard as I can. I came up short and that’s disappointing for myself and to my family and my fans. I just didn’t figure out this hill at all.”

Watching Slovenia’s Tina Maze, literally a rock star in her own country, get another gold – her third medal of these Championships – probably didn’t make matters easier for Vonn. And she seems to have banged up her knee a bit – a troubling sign for someone recovering from two knee surgeries in the last two years.

I know, I know, I can hear the social media trolls now: “Boohoo, Lindsey. Poor little rich girl in a country-club sport, getting bullied by the Euros in the comfy confines of her very own posh ski resort. Go back to your Vail McMansion, curl up on a pile of cash and seek solace in the arms of your uber-rich golf superstar boyfriend.”

That’s likely the outside view of Vonn, but it badly misses the mark on who she really is. At 30 years of age, the native Minnesotan is one of the most driven athletes of her generation. Yes, she’s supremely gifted on skis – an incredible talent most recreational powder hacks like me can relate to on a very personal level – but she’s also borderline obsessed with fitness, conditioning and the endless training it takes to be the best female speed-event ski racer of all time.

The uninformed may look at Vonn’s emotional reaction as whiny sour grapes. Instead, I think it shows just how much she cares about her legacy and about the sport she clearly loves so much.

With the women’s record of 64 career World Cup wins, two Olympic medals (including the only American women’s gold in the showcase event of downhill) and an American record six World Championships medals, Vonn has nothing more to prove on skis. But she wants more, and she wants it here at home, on the mountains she grew up honing her skills on.

Doesn’t matter that she’s already won here in a makeup super-G on the men’s Birds of Prey course in 2011. This was supposed to be her Worlds. Well, even though she’s likely done medaling, these really still are her Worlds, because of all the young racers coming up behind her, all the young fans idolizing her, and the outside fans who only know her from NBC and ESPN.

Shiffrin already has 12 World Cup wins at age 19. Vonn didn’t get her first win until she was 20. Shiffrin, already an Olympic and World Championships gold medalist, could keep Maze from getting two more golds (in Thursday’s GS and Saturday’s slalom), but she knows her place in history. And she really knows what Vonn has done for the sport.

Here’s Shiffrin when I asked her in an interview last spring about breaking the all-time victory mark given that she’s so far ahead of Vonn’s stellar World Cup pace:

“That’s not what motivates me, but growing up I saw Lindsey racing and wanted to be like her, and I saw [retired Croatian great] Janica Kostelic racing and I wanted to be able to say I won as many races as she did. The stats, they’re definitely in my mind. It’s something that’s just tangible and that’s kind of what makes this sport a sport. It makes it worth watching, to be able to have some kind of a record to break. Somebody sets a record and somebody else breaks it and then somebody else breaks that one, and that’s where the excitement comes from. It’s definitely in my mind, but I’m not out here just to beat whatever record Lindsey set.

“I’m a little bit torn because I don’t want to beat her records because she set them, and people should know that forever — that Lindsey Vonn set these record in the U.S. She was the first person to really show people what ski racing is, because it’s kind of a dying sport right now, and she’s the one keeping it alive. I just hope to kind of run alongside her and her and help keep it going – to do my own part to keep this sport alive and inspire other athletes.”

I could write another thousand words and not come close to expressing what Shiffrin had to say in 300 words. Lindsey last Tuesday got the U.S. going with its first medal of these Championships, immediately surpassing the number that the U.S. Ski Team took home the last time Worlds were here in 1999.

Now Ganong and Ted Ligety have joined in the fun, and undoubtedly Shiffrin and Ligety aren’t done. That’s Vonn’s legacy, and she should take comfort that everyone here on her home snow knows and appreciates her dedication to and domination of the sport we all love.