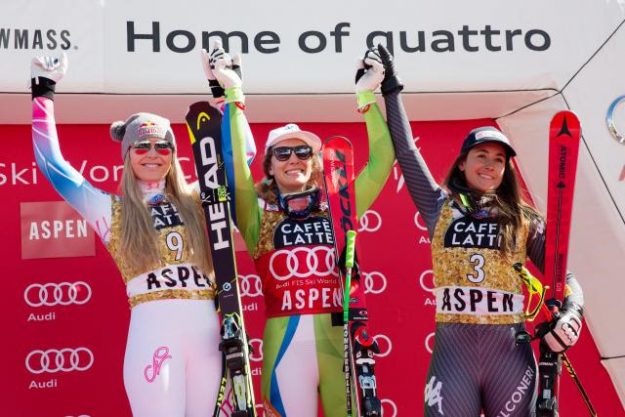 Lindsey Vonn stood on the podium in second place with Ilka Stuhec in first and Sofia Goggia in third. (U.S. Ski Team)

Ilka Stuhec claimed the first ever downhill globe for the nation of Slovenia on Wednesday, dominating Aspen’s World Cup Finals downhill course from the first starting position and holding off a loaded field.

Vail’s Lindsey Vonn, coming off multiple injuries this season but looking for her record 78th World Cup win, was unable to match Stuhec’s speed on the top gliding section of the course, losing more than a half second to Stuhec.

Vonn finished second for her first-ever podium in Aspen, which traditionally has only hosted the technical events of giant slalom and slalom during the regular World Cup schedule. Those events are not Vonn’s strength, and the Vail superstar had raced 20 times in Aspen without a podium finish (top three) before breaking that streak on Wednesday.

The 32-year-old speed specialist wound up .66 seconds off Stuhec’s blistering pace. Vonn has been recovering from an arm badly broken during training last fall at Copper Mountain, and therefore has not been able to push off as well from the start with her pole.

Vonn tried to use her strength to make up time at the bottom on the long and exhausting course but slid after her finish and wound up wedged unhurt under some paneling.

Vonn started 9th, and the 10th racer, American Breezy Johnson, did the splits near the bottom of the course and crashed heavily. She was helped up by medical staff and course workers and appeared to be OK.

Stuhec’s win not only earned her the season-long downhill globe for the first time but also netted her 100 points and statistically kept her in the overall World Cup hunt behind Eagle-Vail’s Mikaela Shiffrin.

Stuhec now trails Shiffrin, who is not racing in the speed events, by 278 points. Stuhec now needs to win Thursday’s super-G and then hope Shiffrin slips up in the GS and slalom over the weekend.

Shiffrin has won seven slalom races this season and three GS races, so any kind of slip-up is highly unlikely.

Vonn has now finished second in the last three World Cup events, including a super-G and downhill on the 2018 Olympic course in South Korea.

Here’s a press release from the U.S. Ski Team on Wednesday’s race:

Vonn was happy with her second-place result, especially as she fought off a cold and fatigue following her return to the World Cup this past January after a pair of injuries.

“I have to put everything into perspective. I am really happy to be second, coming back from this injury … so I’m very appreciative of being on the podium,” said Vonn, who slid into the finish corral pads following her run. “I was so tired. I just couldn’t stop fast enough. That’s one of the first times I’ve done that and I’m happy that (no injuries) happened.”

For the Americans, Travis Ganong (Sqauw Valley, CA) was 17th, and Sam Morse, who won the Junior World Downhill title last week in Are, Sweden, finished 21st in his World Cup debut.

“What an unbelievable experience,” said Morse, who heads off to Mont Ste-Marie, Quebec for the NorAm finals this weekend and then U.S. Alpine Championships at Sugarloaf, Maine, next week before planning a full World Cup season next year. “This is great! It’s an honor just to be here, to be even within the same ballpark with these guys is incredible.”

QUOTES
Travis Ganong
Today’s wasn’t what I wanted, but it’s always good to race at home in the U.S. and be back in Aspen. Last time I raced here was in 2010 … it’s a sweet course, a great venue.

We have the super G tomorrow and this hill is going to be really, really challenging. You go down Aztec and some of those turns are just stacked, super steep and unforgiving.

Sam Morse
What an unbelievable experience. This is great! It’s an honor just to be here, to be even within the same ballpark with these guys is incredible.

Laurenne Ross
My run was pretty solid. I had a few spots I could have cleaned up a little bit, but it’s an awesome day and I feel spring coming on.

It’s awesome to be able to come home and finish out the World Cup season in the states. We’re really lucky to have this because it doesn’t happen very often.

Lindsey Vonn
I was so tired. I just couldn’t stop fast enough. That’s one of the first times I’ve done that and I’m happy that (no injuries) happened.

The training runs I didn’t feel too bad. But today, it’s really in my lungs, and I was in the start and saying ‘I don’t know how am I going to do this.’ But I just skied my best and the results are the results. I skied as hard as I could.

I have to put everything into perspective. I am really happy to be second, coming back from this injury … so I’m very appreciative of being on the podium.