Vail’s Lindsey Vonn crashed during a training run on the U.S. Ski Team Speed Center at Copper Mountain Tuesday morning, just a week before her planned comeback at a women’s World Cup race on the new Raptor course at Beaver Creek. 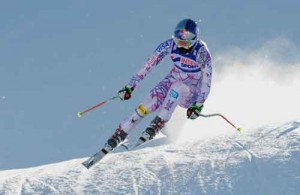 Lindsey Vonn, shown here in a file photo, crashed while training at Copper Mountain on Tuesday.

Contrary to initial reports, Vonn, the defending Olympic downhill champion, was not admitted to a local hospital, nor was it immediately clear if she had reinjured her right knee.

“Lindsey crashed earlier this morning while training at Copper Mountain in Colorado,” Vonn spokesman Lewis Kay said in an email statement. “She was not admitted to the hospital and is currently being evaluated by Dr. [William] Sterett back in Vail. We expect to have clarity on the situation in the next 24 hours.”

Sterett, a surgeon with Vail-Summit Orthopedics, repaired Vonn’s right knee after she blew it out in a crash at the World Championships in Schladming, Austria, last February.

Vonn has been training on snow this fall and during a press event Nov. 8 in Vail declared herself 100-percent healthy and ready to return to action at the Beaver Creek races Nov. 29-Dec. 1.

“I honestly don’t feel it,” Vonn said of her right knee at the time. “I don’t do anything differently because of my knee. I’m training as if I’m 100 percent healthy, which I am, so it’s business as usual for me and it’s not getting swollen, it doesn’t hurt, I don’t feel it.”

Vonn did say that Sterett insisted she keep wearing a brace on the knee, something she said she’s willing to do up until the Winter Olympics in Sochi, Russia, in February.

Vonn skipped the opening giant slalom in Soelden, Austria, last month, and a slalom in Levi, Finland, last weekend, choosing instead to train at home and get ready to return to action at Beaver Creek – a mountain where she won on the men’s course in 2011.

“It would be huge for me if I could win in Beaver Creek,” Vonn said Nov. 8. “Obviously, that’s expecting a lot with my first race back, but I feel like I don’t have any pressure honestly. It’s not like … two years ago when we had the race at Beaver Creek. I’m coming back from injury.”

Now that comeback may take longer.

Officials with both Vail-Summit Orthopedics and the U.S. Ski Team could not offer any additional details about Vonn’s injury.