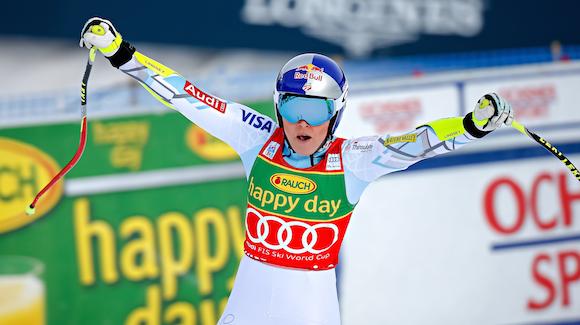 Vail’s Lindsey Vonn completed her third Lake Louise sweep on Sunday, winning a super-G after back-to-back downhill wins on Friday and Saturday. The 70th win of her record-breaking career also earned Vonn, 31, another 100 points and vaulted her into first in the overall World Cup chase with 300 points this season.

But right behind her in second is Eagle-Vail’s Mikaela Shiffrin, who scored 16 points by finishing 15th in her first ever speed event. The 20-year-old technical standout has won 16 slalom races and one giant slalom in her stellar career so far. She’s just four points back of Vonn with the World Cup circuit shifting back to tech events this coming weekend in Are, Sweden.

At the men’s World Cup races in Beaver Creek, heavily favored GS standout Ted Ligety was a DNF in the first run at Beaver Creek after skiing out and came up short in his bid to win six consecutive GS races at a venue where he also won a world championship in February. Austria’s Marcel Hirscher won the race ahead of France’s Victor Muffat-Jeandet, with Norway’s Henrik Kristoffersen in third.

At Lake Louise, Vonn was pumped to get her career 70th win and snap Swiss skier Lara Gut’s super-G winning streak on the track.

“My stepmom wrote me yesterday saying, ‘Sixty-nine is great, but I like round numbers so could you please just make it to 70?’ Last year I had 60 here, so it’s kind of nice,” said Vonn. “Seventy is a pretty big number.”

Vonn hushed any doubters who wondered if she could put an end to Gut’s super-G streak at Lake Louise, which had spanned the past two seasons, but there were more than a few bets on the line before she even pushed out of the starting gate.

“It was a big deal. I feel like there were some people that doubted whether I could win today, especially because Lara had won the last couple races here in super G. Also my technician made some bets with people, so I felt a little bit like I had to come through. It was my physio Lindsay’s last day with me traveling on the road, so I kind of wanted to end with a bang,” said Vonn, who beat second-place Austrian Tamara Tippler by 1.32 seconds.

With her smoothest of three runs all weekend, Vonn unseated race leader and practical unknown Tippler. Starting third, Tippler had capitalized on an early run down a pretty clean track and held a somewhat miraculous lead over the field, considering that her previous best super G finish was 21st in the 2014 Val d’Isere race and her career best had come yesterday with 16th in the downhill. Only Vonn was able to overtake the 39th-ranked super G skier on the day.

For all the spectacle of Vonn’s trifecta, Tippler’s teammate Conny Huetter also leaves Lake Louise with three podium results herself after finishing third in the super G. Before coming to Canada this year, Huetter had only stood on a World Cup podium once in her career.

Gut was looking for her third consecutive super G victory at the venue, but her run – 1.77 seconds off Vonn’s winning pace – proved only good enough for seventh place. She secured three top-10 results over the weekend but not a single top-five finish, and Vonn leapfrogged over both her and Mikaela Shiffrin (Eagle-Vail, CO) to take the lead in the overall.

In the finish area, Gut shook her head and said through a chuckle, “Europe. I have to go back to Europe,” indicating that she is looking forward to stronger results on more familiar snow surfaces.

Although Shiffrin yielded her overall lead to Vonn, she emerged from the day with a solid performance in the debut World Cup speed race of her career. From bib 32, she made technical turns down the top of the course and crossed the finish line in a respectable 15th place.

“Mission accomplished. In the back of my head I was thinking, I’ll get points, but maybe a top 15. So by holding in 15th, that’s a really good day,” said Shiffrin. “There were some spots that I was probably a little bit too wide and maybe turning almost too much. But down the pitch, onto the flats, I felt like I carried some good speed. What I hear is that I was pretty good on the flats, and that’s probably a spot where everyone expected me to be slow. So I’m starting ahead of where I actually thought I would. I felt solid on the skis and it was really fun to be honest.”

Shiffrin will look to clean up some elements before taking on the combined in Val d’Isere, France, later this month, and she caught a bit of the speed bug after her first shot at the Lake Louise course.

“When it came down to it, I was totally comfortable (in the air). And (the jumps) weren’t very big, actually, it was like 20 meters, 25 maybe. I felt super comfortable, and both of them were left-footed turns into the jumps, so just flattening out the skis the timing was fine,” she noted. “I’m probably still a little harsh on my landings, so I’ll work on that, but otherwise the course was amazing. First time on that hill ever, and I don’t ever want to leave. I can see why Lindsey loves this place.”

The women move on to race giant slalom and slalom in Are, Sweden, on Dec. 12-13.