Vail’s Lindsey Vonn saw her streak of seven straight wins at Lake Louise snapped on Friday when she finished 40th in a World Cup downhill, 3.19 seconds behind her victorious friend and rival Maria Hoefl-Riesch of Germany.

But Vonn was upbeat and happy to be back competitively racing after wrecking her right knee in a crash at the World Championships last February and re-injuring the same knee in a training crash just 17 days ago at Copper Mountain. 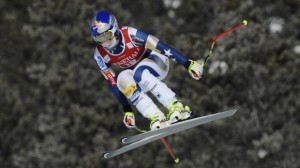 “It just was the first race,” Vonn said. “It’s tough to come to Lake Louise having not raced not only this season but since last February. So it was a little tough with the nerves. Now that I have that first race over, I think [in a second downhill Saturday] I definitely can risk more and be more confident.”

Vonn said she actually had high hopes for a better result going into Friday.

“I’m always a positive thinker and I was really optimistic that I could come down in my first race and win,” Vonn added. “It was wishful thinking, but might as well shoot for the best. I was just too nervous. I was really tight and I skied that way. I wasn’t in a really deep tuck. I wasn’t pushing the line where I could have. I just kind of skied it, and that’s not my style. I attack a race.

“Now that I have that first race under my belt I can go after it more tomorrow and know what to expect.”

Vonn was trying to come back in time for last weekend’s World Cup test run of the new women’s Raptor course at Beaver Creek – the track for next season’s World Championships – but was unable to race after partially tearing the anterior cruciate ligament in her rebuilt right knee while training at Copper.

According to Ski Racing, Vonn appeared to be favoring her uninjured left leg on Friday, especially off jumps.

Another American stalwart on the mend, New Hampshire’s Bode Miller, turned in the top U.S. time in a men’s downhill at Beaver Creek, where a hybrid course was used combining upper sections of Raptor and lower portions of the traditional men’s Birds of Prey course.

Miller was 13th on the hybrid course – used because of the difficulty of preparing two separate downhill courses this early in the season – and Squaw Valley’s Travis Ganong was just behind Miller in 15th. Norway’s Aksel Lund Svindal won his second career downhill at Beaver Creek and fourth World Cup race overall.

Miller, a five-time Olympic medalist and two-time overall World Cup champion, is making a comeback after a knee injury in 2012 at the Sochi Olympic test event ended his season and forced him to sit out the entire 2012-13 season. He was 16th in a downhill last weekend at Lake Louise.

“I thought I skied pretty well,” Miller said of his run Friday. “I hit the line that I wanted to. I made all the adjustments that I wanted to from yesterday [in training] and I took some risk in the turns. I definitely was pushing a bit and I came out on a real high traverse out by Pump House.

“I think I made the adjustments, so even though it’s not a great result, I’m happy with it. I skied the way I needed to ski. Maybe we picked the wrong skis. Maybe it was just weather or nature. I think that’s where we lost it today.”

Temperatures were well below zero at the start of the race and new snow fell lightly throughout the race. The men go again with a super-G on the hybrid course at 11 a.m. Saturday. The event is free and open to the public, with access to the finish area via shuttles out of Beaver Creek Village. There is no ski access. Go to the Birds of Prey website for more information.