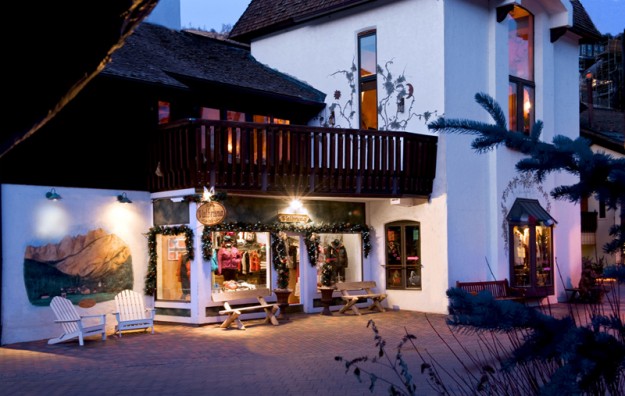 Valbruna Vail in the heart of Vail Village.

But Tonazzi says it all starts with coffee, and that he gives away.

“We serve coffee in our store, and it’s a fantastic connection to all the Latin visitors to Vail,” Tonazzi says. “They come in and they slow down. The store has a slower pace. Our cultures have a slower pace. We’re not in such a rush.”

Tonazzi also sells a sense of cultural connection, providing places around the world for people to come together in the mountains – whether it’s the Colorado Rockies or the Julian Alps of northeastern Italy – to enjoy good conversation and a more relaxed world view.

“I think it’s character,” Tonazzi says. “The connection with our store is the people. We think the same way. We drink coffee the same way — not only enjoy it, but the reason we have it is similar to people in South America. It’s social. You have a coffee with somebody.”

And in the process of having a good, rich cup of Italian coffee in the Valbruna Vail store on Meadow Drive in Vail Village, a visitor from Argentina, or Mexico, or Venezuela may ask about the huge photo on the wall showing about 100 Italians gathered in the small village of Valbruna in the spectacular mountains near the ski resort of Tarvisio.

“Valbruna in Vail is the window of what we do, because we talk about the town, where we have a hotel, we talk about Valbruna travel and all the trips I take with [Warren Miller film star] Chris [Anthony] to go skiing there, to go cycling, to go hiking in those mountains,” Tonazzi says. “The store is our fantastic opportunity, our way to talk to people about Valbruna.”

Valbruna is where Tonazzi’s parents owned a cabin and vacationed from the city of Udine, Italy, in the 1960s. After a long career as a World Cup and then professional ski racer, Tonazzi, who by then had met his wife and former ski film star Amy Wheeler Tonazzi, moved to Vail in 1992 and launched his wholesale clothing distribution company in 1993. He opened Valbruna Vail in November of 1998.

But first, after choosing the name in honor of his childhood vacation home, Tonazzi decided he must pay proper tribute. On Oct. 4, 1998, he gathered the entire town of more than 100 people for the huge photograph that takes up so much space in the Vail store. All the townspeople who posed received a mug from the upcoming 1999 World Alpine Ski Championships in Vail and Beaver Creek and an open tab at Valbruna’s bar.

“Every retailer said to me, ‘How can you sacrifice shelf space for a photograph?’” Tonazzi laughs. “And I felt it was the soul [of the town] and a tribute to the town and the people.”

It makes total sense to Tonazzi that an Italian store deep in the heartland of America should resonate so well with visitors from Mexico, Central and South America.

“I think I see more Italians in Argentina if I walk down the street than sometimes I see in Florence, where they’re all American,” he laughs. “It’s a cultural connection that with the store we don’t need to fabricate because it’s real. We are as a company and a store Italian, and Italian to me equals Latin.”