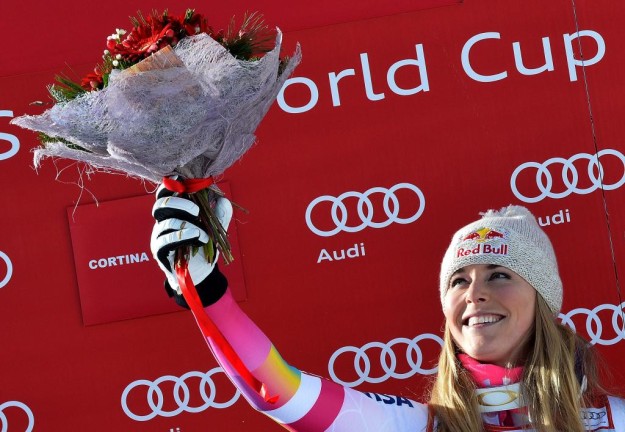 With a powerful run through sunshine and fog, Vail’s Lindsey Vonn etched her name into the ski-racing history book Sunday, winning her 62nd career Audi FIS Ski World Cup at the Cortina downhill by .32 seconds over Austria’s Elisabeth Goergl.

The win by Vonn matched the seemingly unbeatable record of 62 World Cup wins set by Austrian great Annemarie Moser-Proell that had stood for 35 years.

“It’s a pretty special moment for me,” said Vonn, whose parents were in Cortina. “It’s similar to the Olympics. These records mean a lot to me and my family.”

After two days of snowfall, a patchwork of clouds against the blue sky were mixed with bands of fog on the Olympia delle Tofane course in the 1956 Olympic city of Cortina d’Ampezzo. Vonn took the early lead coming off a steep face into a band of fog and kept it through the finish, building continually down the course on which she had won six times previously.

It was the same day on which 11 years ago a then 19-year-old Lindsey Kildow scored her first World Cup podium, finishing third in the Cortina downhill.

“When I won my first podium here I never thought I would make it this far in my career,” said Vonn. “That was the first time I thought I could be a contender. Never in a million years would I have believed I could tie the record.”

Vonn was a little shaky out of the start, but quickly found her rhythm in the soft snow.

“The snow was really soft and I’m not good when it’s soft. I’m from Minnesota and we used to race on ice. i wasn’t very fast on the top,” she said. Originally from Minnesota, Vonn’s family moved to Vail when she was a girl so she could train with Ski and Snowboard Club Vail.

Vonn is the only American woman who’s won more than one overall World Cup title (four) as well a the Olympic downhill gold medal (2010).

“I think 62 is more important to me,” Vonn said of the record. “Now I feel like from here on out I’m already tied for number one and will continue to win races. I just want to do my best. Now I’m just focused on doing the best I can.”

Her biggest challenge on Sunday came from Austrian Elisabeth Goergl running two racers later. Goergl jumped out to a lead and looked to challenge, but didn’t have the speed Vonn had coming into the finish.

Vonn, coming off two knee surgeries since crashing in the World Championships in 2013, now has three wins on the season and leads the downhill standings.

“The last two years have been pretty tough. A lot of people counted me out. I never stopped believing in myself,” Vonn said, adding she’s really looking forward to going after yet another World Championship medal next month in Vail and Beaver Creek, site of the 2015 Worlds Feb. 2-15. ” Having a World Championships at home is something that doesn’t happen often in your career.”

Vonn will have a chance to break the record Monday in a super-G at Cortina, followed by a downhill and a super-G next weekend in St. Moritz, Switzerland.