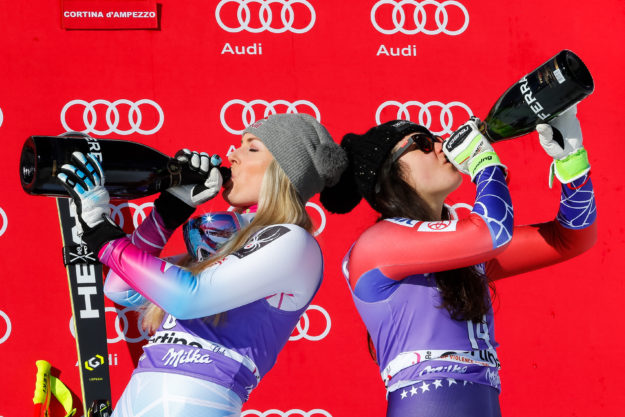 Vonn crushed the course with an error-free run that made her the oldest female athlete to win a World Cup downhill, and she did it by nearly a full second over Tina Weirather of Liechtenstein.

Friday’s downhill winner — Sofia Goggia of Italy, who beat Vonn by a half second after the Vail racer nearly crashed — was a DNF herself on Saturday.

Vonn, meanwhile, had no mistakes on Saturday. The 33-year-old won her second World Cup race of the season, 40th career downhill and 79th race in total — a woman’s record just seven shy of the overall men’s mark of 86 by Sweden’s Ingemar Stenmark.

Vonn will go for her 80th career win Sunday in a super-G at Cortina, where she’s now won six downhill and six super-G races. Here’s a release on Vonn’s win from U.S. Ski and Snowboard:

“I was definitely disappointed with my result yesterday with that big mistake, but today was a great run – clean, solid,” said Vonn, who won by 0.92-seconds over Tina Weirather of Liechtenstein. “I’m very happy with my skiing and it gives me a lot of confidence going forward into the Olympics.”

Wiles was skiing just off Vonn’s pace at the top intervals but nearly overcooked a turn after catching a rut. But she made a strong recovery and built speed toward the bottom of the course to grab her second career World Cup downhill podium.

“I had a lot of fun,” Wiles said. “A little scary at the bottom, but I kept is rolling and it came together. “

“It was a great day having Jackie on the podium,” added Vonn, who has been a mentor for Wiles and provided financial assistance for her early in her career through the Lindsey Vonn Foundation. “I’m really, really proud of her!”

“She has done a lot to help me get to this point,” Wiles said of Vonn. “She’s a great friend, and role model, and I’m super thrilled to be on the podium with her.”

Up next, the women compete in super-G Saturday in Cortina.

“I’m excited,” Vonn said of Sunday’s super-G. “I think I’m skiing better super-G than downhill. I have a lot of confidence from today and yesterday, so I’ll attack as always and see how it goes.”