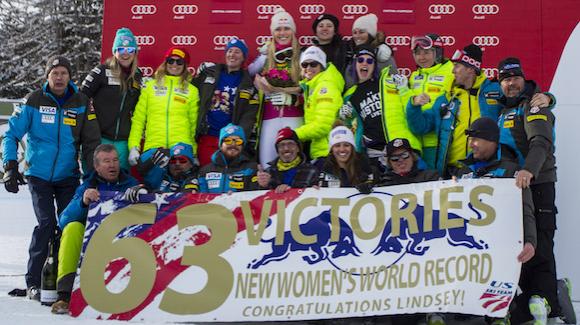 Vail’s Lindsey Vonn put down a near flawless super-G run Monday in Cortina, Italy, to win her 63rd Audi FIS Ski World Cup and set the record as the winningest women’s World Cup ski racer ever.

Skiing at the end of the top seed in the 22nd start position, Vonn took command from the start and posted a .85-second margin over Austria’s Anna Fenninger.

The win — her second in two days after claiming a downhill at Cortina on Sunday — boosted her beyond the mark of 62 career wins set by Austria’s Annemarie Moser-Proell between 1970 and 1980.

Vonn skied relaxed and tactically strong, the weight of tying the record off her shoulders after Sunday’s downhill win.

“I definitely felt like the pressure was off today. I just wanted to go out and have a good run,” she said. “I was relaxed and cool and I think it showed in my skiing. I honestly didn’t know if I would be fast enough. I made some mistakes. I was shocked I was in the lead, but very, very happy.”

Four Americans cracked the top-30 points on the day, including Julia Mancuso (Squaw Valley, CA) in 12th. Vonn took the win ahead of Fenninger and Tina Weirather of Liechtenstein.

Monday’s win was the fourth this season for Vonn, who’s now all the way back from two knee surgeries following a crash during the 2013 World Championships in Schladming, Austria.

“America is very record-centric,” said Vonn, who’s won four overall World Cup titles and two Olympic medals to go along with four World Championship medals during her long career. “Hopefully this will bring more attention to the sport. It will be good going into the World Championships with more interest from the American public. I try to promote the sport; it’s an amazing sport.”

Despite a heavy slate of football on Sunday and Monday, Vonn’s record-tying win made the rotation on ESPN’s Sports Center. Vonn appeared live on Sports Center from Italy on Monday morning.

The 2015 World Championships are scheduled for Feb. 2-15 in Vail and Beaver Creek — only the fourth time the event has been held in the United States (third time in Vail).
“I’m excited to have the World Championships at home in Vail/Beaver Creek,” Vonn said. “I hope I can do something special.”
Vonn’s family was in attendance Monday, as well as her boyfriend, golfing great Tiger Woods, who reportedly watched her record-tying run from his home in Florida Sunday but flew to Italy for Monday’s win.
“To have Tiger here at this race on this occasion was really special for me,” Vonn said. “Everyone important to me is here.”
Woods surprised Vonn with his appearance.
“He’s so awesome; I was so surprised,” Vonn told Sports Center. “When I got to the finish, standing there in the leader box, my dad he left and came back and said, ‘Hey, I found someone.’ And there’s Tiger in his skull mask. I was so surprised and so happy. It was such a special day for me to share it with my parents and Tiger and also my sister. It was awesome.”
Eagle-Vail’s Mikaela Shiffrin tweeted her support both Sunday and Monday:  “Sixty. Three. @lindseyvonn #andcounting #lv63” and “Records tied.. History made.. What is Lindsey Vonn teaching us all? Never. Give. Up. #nevergiveup #bam #62.”
Shiffrin, who has 12 World Cup wins at the age of 19, is third in the overall chase this season with 605 points, but now Vonn is fourth overall and right behind her at 538 points. Slovenia’s Tina Maze leads the chase with 972, and Fenninger is second with 641.
The women’s World Cup moves to St. Moritz, Switzerland, next weekend for two more speed events and more opportunities for Vonn to add to her win total.
Vail Resorts issued a statement of support:
“Lindsey’s tireless work ethic and determination in rehabilitating her knee, getting back into top physical condition and returning to ski racing even stronger and better than before has been truly inspiring as one of the greatest comeback stories of all time,” said Rob Katz, chairman and chief executive officer of Vail Resorts.
“Lindsey’s commitment to excellence and always pushing herself to the next level is a true reflection of the spirit of Vail. We couldn’t be more proud to support Lindsey and look forward to celebrating this historical moment with her when she’s back in her hometown of Vail for the 2015 World Alpine Ski Championships.”
Vonn grew up in Minnesota but moved to Vail as a young girl to train with Ski and Snowboard Club Vail. She owns a home in Vail and has a run named for her on Vail Mountain (“Lindsey’s”).