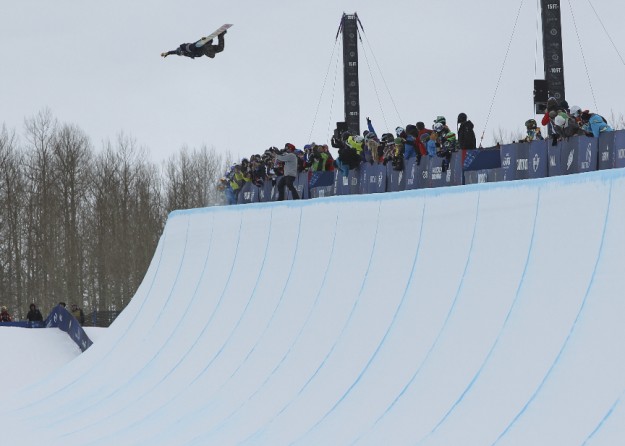 Steamboat’s Taylor Gold, seen here soaring to victory at the Burton US Open Snowboarding Championships in Vail in March, will likely have a shot at a world championship at Park City in 2019 (Jeff Patterson photo).

Vail Resorts will add yet another World Championships feather to its cap in 2019 when its Canyons Resort near Park City, Utah, hosts the skicross and snowboardcross Worlds as part of a three-resort partnership with Deer Valley and Park City Mountain Resort.

Vail and Beaver Creek will host the World Alpine Ski Championships for the third time in February of next year, and the ski company landed yet another prestigious championship event last week at the annual International Ski Federation (FIS) Congress in Barcelona, Spain.

Vail last ski season began running Canyons Resort, and, depending on the outcome of pending litigation, may be running neighboring Park City Mountain Resort by 2019. PCMR, which is currently operated by Powdr Corp., will host halfpipe, slopestyle and big air skiing and snowboarding during the 2019 Worlds.

Deer Valley, the third Park City-area resort, will host the freestyle skiing events of moguls and aerials, which is keeping with its annual freestyle World Cup event.

“The 2019 World Championships will be a major global event featuring the largest showcase of winter action sports outside the Olympics,” said Tiger Shaw, the new president and CEO of the U.S. Ski and Snowboard Association

“Our partnership with FIS and other athletic sanctioning bodies, together with the State of Utah and Park City community – especially Canyons, Deer Valley and Park City resorts – will help to shape this as an historic event in freestyle, freeskiing and snowboarding.”

The USSA played a pivotal role in the addition at the 2014 Winter Games of popular new-school events such as halfpipe skiing — along with slopestyle skiing and snowboarding — and the organization is now pushing big air snowboarding and team snowboardcross for the 2018 Olympics in Pyeongchang, South Korea.

“Past experience in providing the world’s best athletes with a superior venue has situated Canyons to participate in this historic event,” Mike Goar, vice president and general manager of Canyons Resort, said of the 2019 Worlds. “We maintain a strong passion for sport and dedication to showcasing Canyons to the world while delivering an elite event.”

Park City and Utah in general have served as incubator for winter sports since hosting the 2002 Olympics.

“The growth of action sports in Utah continues as athletes train in our world class facilities and on the greatest snow on earth,” said Utah Gov. Gary Herbert. “Utah truly is the state of sport and will be a great global host for the 2019 World Championships.”

Closer to home in Colorado, the FIS Council also decided that for the first time in 16 years Aspen will host the best male ski racers in the world March 15-19, 2017, when the season-ending World Cup Finals are held on Aspen Mountain. And the best women in the world — who regularly come to Aspen every November — will join the men.

The annual World Cup Finals often determine the season-long discipline title winners, and sometimes the overall World Cup champions. The last time the United States hosted the finals was at Vail in 1997, and Beaver Creek annually hosts the best men on the World Cup circuit on its Birds of Prey course.

Aspen was no slam dunk for the 2017 Finals, as European nations vied to keep the event closer to home during the annual FIS confab. Former United States Ski and Snowboard Association President and CEO Bill Marolt, an Aspen native and FIS Council member, was instrumental in securing the event.

“The selection of Aspen for World Cup Finals illustrates the confidence the FIS Council has in Aspen as a classic World Cup community,” Marolt said in a press release. “Our team at the USSA has worked closely with Aspen and FIS for several years in preparing an outstanding bid to welcome the world to America.”

The last time men raced Aspen a very young Bode Miller was second in the slalom, one of his American men’s record 33 World Cup victories. The oldest man to ever win an Olympic alpine-skiing medal in Sochi earlier this year, Miller has indicated he wants to keep on racing.

All five disciplines – slalom, giant slalom, downhill, super-G and combined – will be contested at the Finals in 2017, marking the return of the speed events of downhill and super-G for the first time since the women raced speed in 2007. Legends such as Bill Johnson and Franz Klammer have previously won speed events at Aspen.

If she’s able to return from a knee injury that cost her last Olympic season, Vail’s Lindsey Vonn would certainly be among the favorites on the women’s side, although she’s yet to win a race at Aspen during her record-shattering 59-win career.

Aspen has a long history of World Cup ski racing and hosted the first World Championships outside of Europe in 1950.

“Aspen became an iconic brand in the late 40s by attracting world class athletic and cultural events, beginning with the 1950 FIS Championships in what was then a sleepy little town,” said Mike Kaplan, president and CEO, Aspen Skiing Company. “Fast forward to present day and this community exudes vibrancy and the pursuit of excellence and we are incredibly excited to host the world’s best athletes in the Roaring Fork Valley in 2017.”

The World Cup Finals will attract a global broadcast audience of tens of millions as NBC provides extensive coverage of the five-day event, including live broadcast and digital streaming.

“As a club athlete racing at Aspen, I would always dream that someday I’d be able to race a World Cup on my home mountain,” said downhill racer Alice McKennis of Glenwood Springs, who’s also coming back from injury next season. “But as a female speed skier, it didn’t seem likely. Now, it is extremely motivating to know that if I work hard, I’ll be able to race World Cup downhill and super-G on home snow in 2017.”