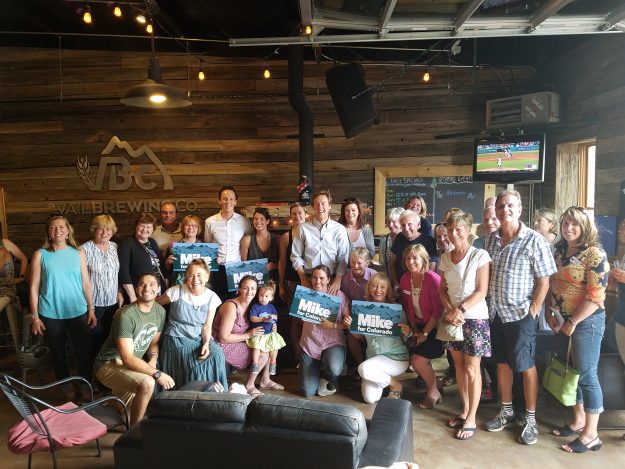 Former state Sen. Mike Johnston, with current state Sen. Kerry Donovan and a group of supporters at the Vail Brewing Company in Eagle-Vail (David O. Williams photo). Johnston is seeking the Democratic nomination for governor in 2018.

EAGLE-VAIL — Gubernatorial candidate Mike Johnston – the Democrat’s “rising star” in the race to replace term-limited Gov. John Hickenlooper – on Monday called the departure of establishment favorite Ed Perlmutter from the race a “big, big deal” for his campaign.

“Many of you know Ed Perlmutter and probably like Ed Perlmutter because he is a good man who is a great public servant who is well loved across the state,” Johnston said at a fundraiser near his hometown of Vail. “So, for him to step back was a big deal for us, opens up big opportunities for us among people who are on the fence.”

Johnston went as far as calling the Perlmutter pull-out fortuitous, quoting his former Vail Mountain School headmaster and soccer coach Bob Bandoni, who was in the crowd at the Vail Brewing Company: “As Bandoni used to say, ‘The harder you work, the luckier you get.’”

Johnston, a former state senator from Denver who grew up in Vail, came out of the gate early with a huge fundraising haul in the first reporting period and another strong showing in the second. He addressed the fact Polis, a millionaire Internet entrepreneur, can largely self-fund.

“Jared’s very different because he’s essentially not going to raise anyone else’s money; he’s just going to put his own money in, so I think he spent $8 million of his own money on his congressional race the first time,” Johnston said. “I expect he’ll do twice that this time [for governor].”

A career educator, Obama administration education policy advisor and state lawmaker, Johnston grew up working in a pioneering Vail hotelier family, where his late father Paul once served as mayor of the globally renowned ski town. Polis’s family owns a home in Vail, and he represents the resort area in Congress.

“What we’ve also found is these races I don’t think can be bought,” Johnston said of Polis’s perceived financial advantage. “These races are a function of people thinking you have a plan for the state that’s going to make a difference, that you’re willing to listen early and often and that you’re able to bring people together to get really big things done.”

Asked if Polis is too liberal to win on the Western Slope and Eastern Plains, Johnston insteasd discussed his own ability to appeal to a broader base.

“I’m the only candidate with roots on the Western Slope, the only candidate who’s lived on this side of the Continental Divide and knows what the entire state looks like and feels like,” Johnston said, also touting his bipartisan credentials in the state senate.

Johnston trotted out stats that of the 120 bills he passed in the legislature that became law and were signed by the governor, 93 percent had Republican co-sponsors. That’s when state Sen. Kerry Donovan, a Democrat endorsing Johnston in the primary, jumped in to break up the stump speech.

“All you have to do is pass one bill with a Republican and then you can claim that you’re bipartisan and you work across the aisle and have the talking point and be able to back it up, but to actually see it in reality is what Mike does,” Donovan said, interrupting to chide Johnston for his oft-repeated “talking points” on bipartisanship.

“The reality is, when I sit on the floor and watch people work and try to pass bills and build alliances, he was over mucking around with the Republicans more than almost any other Democrat,” she added.

That perception could prove key in a primary race now open to independents and also in some parts of rural Colorado, where Trump supporters abound and fossil-fuel energy production is still king.

Johnston took another small shot at Polis by pointing out he was the first to roll out the 100-percent renewable energy by 2040 plan, with a proposed free job training program for displaced energy sector workers willing to put in service time for a sort of state-run Works Projects Administration.

Of course, Johnston jumped into the race first, with a campaign rollout last winter, and Polis just got in in June.

Roberts also reportedly has filed paperwork to run for that seat in 2018, seeking to replace Democratic state Rep. Diane Mitsch Bush, who says she will resign this fall to run against U.S. Rep. Scott Tipton, R-Cortez, in the 2018 3rd Congressional District race.