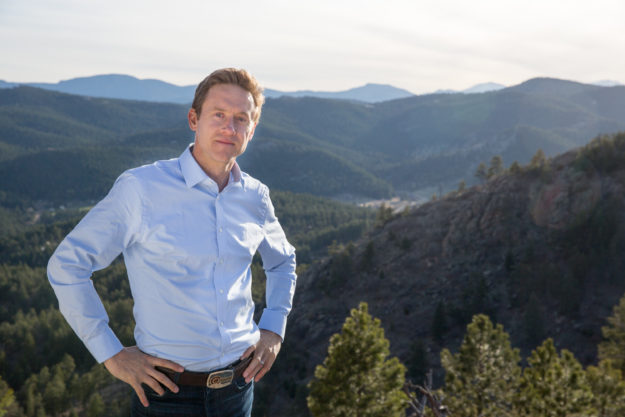 SILVERTHORNE, Colo. — Vail native and former state Sen. Mike Johnston says he’s the only Democrat in a crowded Colorado governor’s race for his party’s nomination in the June 26 primary who owns guns and knows how to use them.

“I own four guns right now and I’m very proud of it, and I’ve owned guns since I was 10,” Johnston said. “I’m comfortable to challenge anyone in the race, Republican or Democrat, to a shooting contest if they want to do that.”

But rather than head to the local gun range or sporting clays shooting park, Johnston prefers to fire off a few salvos of reasonable dialogue on a topic that’s come to define his campaign. And he wants to engage the people he says need the most convincing when it comes to additional guns laws – members of the National Rifle Association.

“If we get everyone at the same table here, Coloradans can solve this problem – even at what people would think of as the extremes of this issue,” Johnston says of Colorado’s legacy of mass shootings from Columbine to Aurora. “It’s not political stakeholders, and it’s not leaders of organizations. It’s the citizens who are the ones who live this every day.”

Those are the folks Johnston is inviting to what he’s calling a “family dinner” at Coohills restaurant in downtown Denver on Wednesday, May 30: veterans, police officers, shooting survivors, gun-control advocates and NRA members. No politicians or policymakers … other than Johnston.

Regular folks like the ones he met May 19 at a Friends of the NRA fundraiser in Silverthorne. Johnston skipped a gun-control debate on the Front Range that night where no Republicans or NRA members were expected to attend, instead heading up to the mountains to talk gun rights.

Three of the first four NRA members he talked to that night at the Central Rockies Friends of the NRA banquet at Blue River Pavilion supported some form of red-flag legislation to temporarily take guns away from people with mental health issues who pose a threat to themselves or others.

“I felt like there are NRA members who feel the same way and why don’t we go straight to them and open the conversation up instead of staying in our corners and throwing stones?” Johnston said. “It was very affirming to find that on this issue of red flags there is actually a lot of agreement.”

A bipartisan red-flag law garnered the support of local and statewide law enforcement earlier this month, passing out of the Democrat-controlled House before being killed in the Republican-controlled Senate. The red-flag concept is part of Johnston’s #4NoMore gun-safety plank.

Lyle Sidener, a Kremmling resident who attended the May 19 Friends of the NRA event in Silverthorne, says he’s worried about due process in any kind of red-flag law and how best to protect law-abiding gun owners from possible abuse. Still, he realizes something needs to change.

“It’s a tough deal. Obviously, I’m a gun owner and gun-rights supporter, and part of me says we’ve got laws and those activities are already illegal – to take a gun into a school and kill someone,” Sidener said. “But there’s flaws in the system that these things continue to happen.”

A game warden supervisor for Colorado Parks and Wildlife, Sidener says the Central Rockies chapter of Friends of the NRA has raised a great deal of money for youth shooting and hunting programs through ROTC, 4-H, Boys Scouts and other organizations. He doesn’t want to see laws that in any way infringe on legitimate gun ownership for sports and hunting.

“I hate to see something like that restrict what a law-abiding person is doing — whether it’s a hunter or a shooting-sports advocate or someone like that – to have their rights infringed upon because the existing system is not protecting us in those instances,” Sidener added.

Johnston said red-flag laws have more support than some of the gun laws passed by the Colorado Legislature in 2013 in the wake of the Newtown and Aurora theater shootings.

“I understand why probably all of those [NRA members] disagreed with me on the magazine idea,” Johnston said of the 15-round limit passed while he was in the Senate in 2013. “Their argument is that applies to everybody equally – the responsible people and the non-responsible people. What appeals to gunowners about the red-flag idea is that it’s a targeted intervention.”

Nationally, the NRA has signaled some openness to limited red-flag laws.

Peggy Long, a past chairwoman of Central Rockies NRA and the current treasurer, said her group really works hard to stay out of the political fray.

“The Friends of the NRA is solely a nonprofit organization, and our mission is to promote and provide funding for shooting sports and education programs and range development,” Long said. “We are non-political, we stay out of it, and that’s not our cup of tea. We’re the friends. We’re doing what we feel is right for the protection of the Second Amendment and we don’t get into it.”

Long said the May 19 event was sold out and raised the most money ever, with “a lot of happy faces leaving the room.” While she did not see or talk to Johnston, Long said a Denver reporter was asked to leave the event, and there was also an incident with a Republican attendee.

“They actually purchased a ticket and came in and did everything within the rules until one of the guys showed up and he had a life-sized poster of Trump, and I would not let him in the premises either,” Long said. “We don’t campaign, and we don’t allow campaigning.”

Johnston said he was cognizant of the local chapter’s admonition against politicizing guns.

“On purpose I did not want to go in and make it a political event or a political experience. I wasn’t trying to speak in front of a crowd or negotiate a deal,” Johnston. “I just wanted to talk to regular folks and get a sense of where they stood on this.”

Editor’s note: A version of this story first appeared in the Vail Daily.