Powder days back in the forecast for Vail, Beaver Creek this week

After heaping helpings of fresh, if somewhat water-dense, snow in December and January, the first week of February has seen a warm, relatively dry respite for weary powder skiers and driveway shovelers in the Vail Valley. 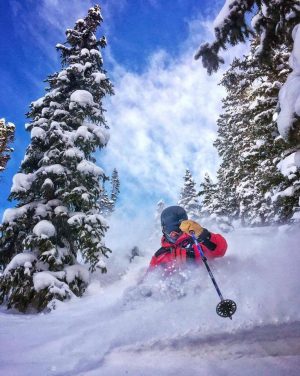 “That should change as the storm ramps up with moderate to heavy snow from later Tuesday through Wednesday morning, totaling double digits for the northern 2/3rds of the state,” Opensnow.com meteorologist Joel Gratz wrote Tuesday morning.

“Still lots of uncertainty with this storm. Expect dry weather from Wednesday night through Friday morning, with a colder storm on Friday night and Saturday delivering 4-8 inches. Then our next storm should arrive between February 18-20th.”

Good to have some possibly deep powder turns back into the forecast ahead of the week-long mid-February break for the local school system next week — an opportunity for many local residents to get out of town and enjoy a beach break or just stay home and ski.

At least two Vail Valley residents will be over in St. Moritz, Switzerland, trying to make some World Cup ski-racing history this week and next at the World Alpine Ski Championships — an event Vail and Beaver Creek has hosted three times (1989, 99 and 2015).

Vail’s Lindsey Vonn kicked off the worlds by failing to finish in the opening women’s super-G race. Having crashed a few times lately and coming off injuries that cost her nearly a year of racing action, Vonn may be understandably tentative.

Vonn has another legitimate shot of adding to her American record six World Championships medals with the women’s downhill still on the calendar.

Eagle-Vail’s Mikaela Shiffrin did not race in the super-G and instead is training for her two dominant technical events, giant slalom and slalom. Shiffrin is the two-time defending world champion in slalom and the defending Olympic slalom champion. She’s also leading the overall chase on the World Cup circuit.

It already seems so long ago when Vail and Beaver Creek last hosted the Worlds (just two short years really), but don’t worry, big events are still on the horizon this season. The Burton US Open Snowboarding Championships return to town on Feb. 27, featuring Olympians like Shaun White and Jamie Anderson.

BURLINGTON, VT (February 6, 2017) –The 35th annual Burton US Open Snowboarding Championships announce the Burton US Open Live Music Lineup featuring an enhanced entertainment roster packed full of live bands and DJs including Lizzo, D.R.A.M, Xavier Omär, Gramatik and more—all for FREE! The live music will run from March 1st – 4th in the heart of Colorado’s Vail Village following each day’s snowboard competition. This roster of free live concerts featuring 13 artists builds on the close tie between snowboarding and music, which the Burton US Open has celebrated throughout its 35 years. Fans can expect to hear everything from hip hop, jam bands, pop, indie, DJs, R&B and rock during this four-day après festival.

Entertainment kicks off on Wednesday, March 1st on the Solaris Concert Stage in Vail Village following a full day of slopestyle semi-finals competition and the Junior Jam award ceremony. The night’s entertainment includes the stripped down, foot-stomping blues of LA-Based trio The Record Company, also out of LA, the buzzy underground indie-pop duo the Oyster Kids, plus Burlington Vermont’s own DJ Cre8 and event DJ extraordinaire, DJ Naka G returning to the US Open to get the party started and keep it going through the weekend.

Following halfpipe semi-finals on Thursday, March 2nd, American Jam band Twiddle takes the stage for an epic double set. This Vermont-based band has played sold out venues from the massive Mountain Music Festival to the Frendly Gathering, entertaining fans with a melded blend of jazz, reggae and funk rolling the feel-good vibes through the audience.

Saturday, March 4th features the exciting culmination of the US Open with the halfpipe finals and award ceremony followed by a trio of diverse and exciting artists—Keys N Krates, Skratch Bastid and Xavier Omär—taking the Solaris Concert Stage. Canadian three-man EDM band Keys N Krates bring a high-energy hip-hop infused live performance. Also hailing from Canada, World-renowned DJ Skratch Bastid will hit hard, expertly scratching and mixing through a must-see set. And San Antonio’s own Xavier Omär brings a soulful modern twist to R&B-rooted songs with a foundation in rap and positivity; he was recently named one of Forbes Magazine “5 Alternative R&B Artists To Look Out For in 2017.”

All events are free and open to the public. For details on all things US Open, follow the hashtag #BurtonUSOpen and head to BurtonUSOpen.com or download the official Burton US Open app on your mobile device – coming later this month.