Today was a banner day for Vail Resorts’ ski areas in Colorado as a monster storm hammered the state starting early Thursday morning and continuing into the night Friday. Nearly 3 feet of new snow will be left behind when the storm moves east Saturday morning. 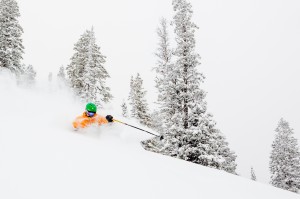 February is shaping up nicely in terms of more great powder skiing, according to Opensnow.com.

“Looking ahead to next week, the entire state will get a few inches from a storm that will last from Monday through Wednesday,” Opensnow.com meteorologist Joel Gratz wrote this afternoon. “This could produce perhaps half a foot for the San Juan [Mountains] with less to the north.

“The bigger story will be a strong storm on Thursday and Friday that will target the San Juans with heavy snow. Areas further north should also see flakes, but the San Juans will probably be the focal point for that storm.”

“Avalanche conditions are very dangerous. Natural and human-triggered avalanches are likely. Some avalanches may be very large and destructive. Backcountry travelers are advised to stay well clear of all avalanche terrain. Avoid traveling on or under steep slopes.”