A week ago, greenish grass was still blowing in a warm breeze at most Colorado ski resorts – even the ones that were open. But then on Monday the first of a series of winter storms blew through, depositing in excess of 3 feet of new snow in the high country. 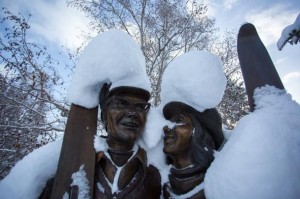 Now ski area operators – 7 of whom are currently operating for the 2014-15 season — no longer have to dream of white Thanksgiving. It’s a reality.

Vail opens on Friday, and should offer far more terrain than the typical Born Free white ribbon for opening day. Although Vail hasn’t confirmed it yet, the mountain will likely offer skiing down to both Lionshead and Vail Village.

Eldora also opens on Friday, which will bring the total number of operating ski areas in Colorado to nine. Many more resorts, including Beaver Creek on Nov. 26, open during Thanksgiving week.

The big winner last week was Breckenridge, which postponed its original Nov. 7 opening day until Friday, Nov. 14. Breck received 46 inches of snow during the week, allowing it to open with a 30-inch base, 5 lifts and 12 trails.

“We could not be more excited about this new snow as our resorts are opening and we head into the Thanksgiving holiday,” said Pat Campbell, executive vice president and chief operating officer of Breckenridge Ski Resort.

Another Vail-owned resort, Keystone, had to postpone its scheduled Oct. 31 opening but then received 39 inches of new snow last week. It now has a 25-inch base with 4 lifts and 7 trails open.

Although their snow reports aren’t yet up and running, Vail and Beaver Creek both got around 3 feet of new snow last week, in addition to much colder temperatures ideal for snowmaking. That’s the best possible news for crews trying to get World Cup and World Championship courses ready for the season.

Sunday, Nov. 23, is the last chance this season for skiers and snowboarders to buy Vail Resorts’ Epic Pass, which for $769 for adults provides access to 22 ski areas in five states and around the world, including the new addition of Park City this ski season.

Weather forecasters are calling for mostly sunny and dry weather the first half of this week in Colorado, with snow returning later in the week and in time for a possible powder day over the coming weekend. After unseasonably warm, dry weather in October and early November, Colorado is now on track for above-average early season precipitation.

“The punchline for the next 7-10 days is that I think we’ll see multiple additional storms and most of the state has a good chance to be at or above average snowfall by the time we hit Thanksgiving,” writes meteorologist Joel Gratz of Opensnow.com. “I still can’t believe I’m writing that as the statistics were not on our side after a mostly dry first 9 days of the month.”