Vail Resorts on Thursday added a slew of European resorts to its Epic Pass season ski pass deal for the coming 2016-17 ski season, including the sprawling Les 3 Vallees complex in France and the birthplace of alpine skiing Arlberg region of Austria. 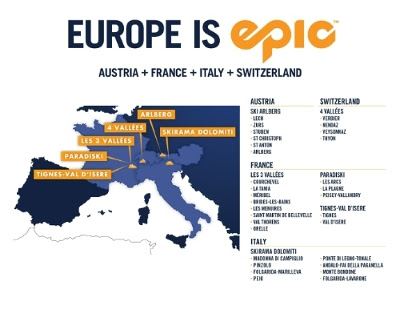 BROOMFIELD, Colo., Sept. 1, 2016 /PRNewswire/ — How do you pack more value into a ski pass which already includes world-class destinations like Vail, Beaver Creek, Breckenridge, Park City and Heavenly? Make it the only multi-resort pass to offer significant access to European skiing and snowboarding. Today Vail Resorts announced it will add Les 3 Vallees, Paradiski and Tignes-Val d’Isere in France, Skirama Dolomiti Adamello Brenta in Italy, 4 Vallees in Switzerland, and Arlberg in Austria to the 2016-2017 lineup of the Epic Pass, which is already the world’s most popular ski pass due to the unlimited, unrestricted skiing access and the versatility to visit 13 iconic resorts in the U.S. and Australia.

Europe is the birthplace of skiing. That tradition, along with its above-tree line terrain, its cutting-edge apres-ski experience, and abundant culture and heritage found in the surrounding mountain towns makes Europe the ultimate dream for any skier or snowboarder. The Epic Pass was the first multi-resort pass to offer European access and now it offers the most expansive experience.

The 2016-2017 Epic Pass offers unlimited access to Vail, Beaver Creek, Breckenridge, Keystone and Arapahoe Basin in Colorado; Park City in Utah; Heavenly, Northstar and Kirkwood at Lake Tahoe; Wilmot Mountain in Wisconsin, Afton Alps in Minnesota and Mt. Brighton in Michigan; and Perisher in Australia. The Epic Pass allows pass holders to visit resorts as they choose, each with its own personality and distinct experience, combining unique terrain and traditions with Vail Resorts’ renowned service and unmatched resort improvements. The Epic Pass is available at the guaranteed lowest price of $809 for adults at EpicPass.com through Monday, Sept. 5, 2016.

“There is nothing in the ski industry today that can compare to the value of the Epic Pass,” said Kirsten Lynch, chief marketing officer of Vail Resorts. “The value of the Epic Pass is giving skiers and snowboarders the flexibility to ski when they want and the choice to ski where they want, and the variety of experiences our resorts offer, whether it’s the iconic slopes of Vail or Park City, or the grandeur and tradition of Europe, which should be on the bucket list of every skier or snowboarder. Whether you ski five days or 100, no pass is tailored to the way skiers and snowboarders actually want to access the best mountains in the world like the Epic Pass.”

That access now includes four of Europe’s most iconic destinations. France’s largest ski areas, Les 3 Vallees, Paradiski and Tignes-Val d’Isere, offer a unique playground to skiers and snowboarders from all over the world, accessing five glaciers, 391 ski lifts and over 800 miles of marked runs for all ability levels within a 30-mile radius. The three areas combine high-altitude skiing guaranteeing quality snow from November to May with stunning views of Mont Blanc and a 360-degree panorama of the French, Swiss and Italian Alps.

“This partnership with Vail Resorts gives skiers and snowboarders access to some of the most iconic winter destinations the world has to offer,” said Vincent Lalanne, General Manager of Association Les 3 Vallees. “We couldn’t be more excited to provide this type of value to our dedicated guests who want to experience the best skiing in Europe and the U.S.”

South of the Alps, nestled amongst some of the most beautiful mountain peaks in the world such as the Brenta Dolomites and Adamello (11,666 feet), is some of the best skiing in Italy. Skirama Dolomiti Adamello Brenta is home to 150 lifts and 236 miles of ski slopes that make up acclaimed resorts such as Madonna di Campiglio and Pinzolo in Val Rendena; Folgarida-Marilleva, Peio and Tonale in Val di Sole; Ponte di Legno, Andalo-Fai della Paganella, Monte Bondone and Folgaria-Lavarone. The winter offering is enriched by the high-quality cuisine and the exclusive “Italian style.”

Verbier, part of the 4 Vallees ski area, is the largest resort in the Swiss Alps, is acknowledged as one of the premier “off piste” resorts in the world, and is home to a number of professional freeride competitions. Above and beyond this reputation, Verbier is well-known internationally for its electrifying, cosmopolitan nightlife, and the resort is proud of its legendary apres-ski and its lively clubs. While skiers and snowboarders from all over the world rave about this off-piste paradise and fun evenings, families also appreciate the resort’s social atmosphere and family-friendly offerings.

For decades, the mountain range between Tyrol and Vorarlberg, which is home to Arlberg, has been a highly sought-after metropolis for international ski and snowboard enthusiasts. Arlberg is widely considered the cradle of modern skiing and in December 2016, thanks to the opening of four new cable cars, it will be Austria’s largest linked ski area. Also the birthplace of champions, athletes from Ski Club Arlberg have garnered an incredible 83 medals at various Olympic Games and World Championships.

“For value, for ease of use, for access to world-class destinations, for constant improvements in the guest experience, and now for being the only pass to offer significant access to Europe, the Epic Pass is in a class by itself,” Lynch said.