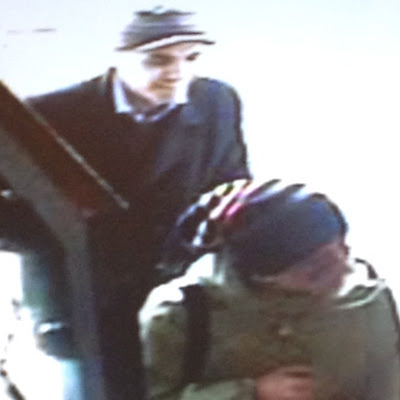 Vail police are seeking this couple suspected in at least one fur coat theft in Vail Village over the weekend (Vail Police Department photo).

The value of the coat was reported to be about $95,000 and two suspects were reported to have been involved, one male and one female. The male was described as a tall thin white male speaking in an eastern European language and believed to be approximately 50 years of age. The female was described as a shorter white female with dark brown hair and is believed to be in her mid-twenties.

On Monday, March 31 while investigating the earlier offense, officers located an additional lead and discovered a second theft of a fur coat that occurred on Sunday, March 30. The coat taken in that incident was valued at about $50,000 and was taken from a different store, also in the Vail Village.

Upon investigating that crime, a video of the suspects was located from the store’s closed circuit camera system. A male and female were captured on video committing the second crime. At this point, it is unknown if the two crimes are connected. Photos of the suspects in the second crime have been released and the Vail Police Department is requesting the public’s help in identifying these individuals.

If you have any information on the whereabouts or identity of the suspects pictured, please contact Detective Rusty Jacobs at 970-479-2209.