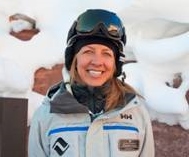 Howe spent 20 years in operations at Telluride, beginning as a lift operator and eventually rising to vice president of resort operations, a role in which she managed Telluride’s ski patrol, snow making, grooming, lift operations, lift maintenance, parks, events and fleet maintenance, the same functions she will lead for Vail Mountain.

“I’m excited to welcome Elizabeth to our Vail Mountain team,” said Chris Jarnot, senior vice president and chief operating officer of Vail Mountain. “I’m confident that her experience and leadership abilities will be assets for us in continuing to differentiate Vail as the greatest mountain resort experience in the world.”

In her role at Telluride, Howe also served as director of the Telluride World Cup Organizing Committee in 2009, 2010, 2011 and 2012, a position which will lend itself to events like the Burton US Open Snowboarding Championships and the upcoming 2015 FIS Alpine World Ski Championships in Vail and Beaver Creek. She has also worked with organizations including the National Ski Areas Association, the Colorado Passenger Tramway Safety Board and the United States Forest Service.

Howe holds a Bachelor of Science degree in biology from Loyola University Chicago.