Great snow at Vail, Beaver Creek, with more on the way Monday

Ski conditions were exceptional the last two days at Vail and Beaver Creek, with around a foot of fresh powder piling on top of modest weekend accumulations, and temperatures staying cold enough to keep the snow from setting up too much. 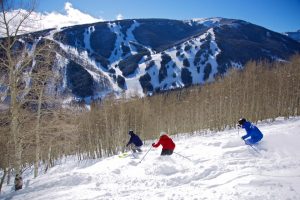 Now we’re in for a brief three-day dry spell before catching the southern edge of a northern storm that should drop another 3-6 inches of powder Sunday night into Monday morning. Unfortunately, temps will get quite high on Friday and Saturday, so the snow will likely set up quite a bit before the next dusting. After that, the rest of next week looks mostly sunny and dry.

“We’ll enjoy a few sunny days through Saturday, then the next storm will bring snow (3-6”+) to most mountains from Sunday night through Monday night,” Opensnow.com meteorologist Joel Gratz wrote Thursday morning. “Following that system, we’ll return to tranquil weather for most of next week with a chance for snow starting around March 10th.”

That means the Burton US Open Snowboarding Championships will enjoy classic Colorado ski conditions this weekend at Vail, with warm, sunny weather and plenty of snow to ski and ride. Legends of the sport will be in action — including Shaun White and Kelly Clark — plus plenty of free music throughout town.

Some of the same athletes will hope to hit it big in Pyeongchang, South Korea, a year from now at the Winter Olympics. Vail’s Lindsey Vonn was back in action there today after a rough weekend in Crans-Montana, Switzerland, that saw her come down with food poisoning and crash in a super-G.

Vonn appears to be back in top form after finishing first in today’s downhill training run on the Jeongseon course. The women will race a World Cup downhill and super-G there this weekend before returning to the States for tech races in Squaw Valley, Calif., and then the World Cup Finals in Aspen.

Eagle-Vail’s Mikeala Shiffrin traveled with the U.S. Ski Team to South Korea to check out the 2018 Winter Olympic venues but was not planning to compete in the two speed events.