Another 10 inches possible Wednesday through Friday

Fresh snow finally fell in the new year at Vail and Beaver Creek, which had both been relatively dry since a Christmas storm 12 days ago. Vail reported 9 inches of new snow Sunday morning, while Beaver Creek chimed in with six new. And more is in the forecast for later this week. 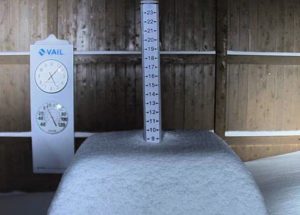 “Ski first chair on Sunday morning to get it while it’s fresh! This week, we’ll see dry weather on Monday and Tuesday, then most mountains will see snow on Wednesday and Thursday and perhaps into Friday. We will then experience dry weather from January 13-17, and a stormy pattern should set up starting on or around January 18th.”

Snow was continuing to fall fairly steadily at 8:30 a.m., Sunday, in EagleVail.

That’s very good news for a region now experiencing moderate drought conditions, according to the U.S. Drought Monitor. Vail has about a third of its average annual snowfall, and needs a lot more snow this week to even begin to think of opening its legendary Back Bowls.

Beyond ski conditions, water officials across Colorado are starting to express concern that ongoing drought conditions will impact stream flows this spring and summer.

The Denver Post recently reported the state’s snow pack is the worst it’s been at this point in the season in more than 30 years.

Even significant winter and spring storms the rest of the season might not allow the state to catch up to average snow pack conditions.

Of course, anyone who’s lived in the state’s high country for any amount of times knows that the snow can start coming in waves and not stop until well into the spring and even early summer.

UPDATE: Forecasters are calling for up to a foot of new snow between Wednesday afternoon and Friday morning across most of the state, then more snow next week. Go to Opensnow.com for the latest.