The USA Pro Challenge cycling stage race will be back in Vail for the classic Vail Pass Time Trial again in 2014, but Beaver Creek will not host a mountaintop finish as it has for the past two years.

USAPC officials announced the 2014 tour course in Aspen Monday, Nov. 4, placing Vail in the sixth of seven stages on Aug. 23, with the final stage to be voted on by Colorado cycling fans. 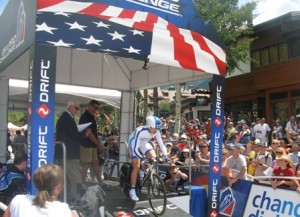 “This is going to make for a huge weekend in Vail for locals and guests alike. Given our race is the next to last stage, I think it’s safe to say that Vail may well determine who wears yellow once again.”

Last year, in an uphill battle to the finish, eventual tour champion Teejay van Garderen crossed the line first, taking home the stage win and solidifying his hold on the yellow leader jersey.

Destroying the record from 2011 when the race used the same course, van Garderen put up an impressive time of 25:01.94. The “race of truth” was won in the final moments, though, as he put four seconds on the second-place finisher, Andrew Talansky.

In the first year of the wildly popular tour, eventual overall winner Levi Leipheimer beat out van Garderen on Vail Pass in 2011. The 2012 version did not include the time trial, although a stage ended in Beaver Creek. Now it’s Beaver Creek’s turn to take at least a year off.

Beaver Creek officials decided to take a year off to focus on preparations for the 2015 FIS Alpine World Ski Championships.

“Beaver Creek did a tremendous job and they will be back on the schedule in the future,” Folz said.  “Next summer, their full focus will be on the World Championships.”

Announced in Aspen, next summer’s tour will encompass nine cities throughout Colorado, including Aspen, Crested Butte, Gunnison, Salida/Monarch, Colorado Springs, Woodland Park, Breckenridge and Vail, along with a final Front Range stage to be determined by an online fan vote.  The 2014 tour will kick off on Aug. 18, culminating on Aug. 24.

The Vail stage of the 2014 U.S.A. Pro Cycling Challenge will be organized through a collaborative effort involving the Vail Valley Foundation, the Town of Vail, Vail Resorts and cycling enthusiasts throughout the Vail Valley.