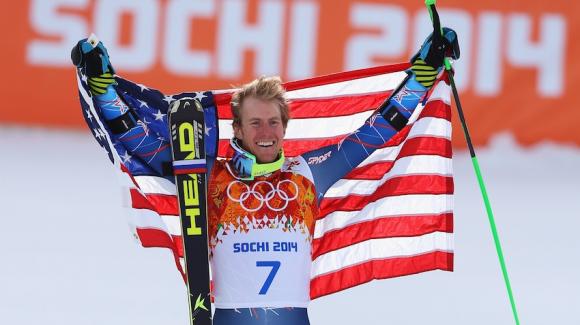 This is the one he wanted – the gold medal that mattered most to Ted Ligety.

And the Park City ski-racing superstar delivered in the clutch Wednesday, winning the giant slalom at the 2014 Sochi Winter Olympics by nearly a half a second over silver-medalist Steve Missillier of France. France’s Alexi Pinturault claimed the bronze.

Ligety, the back-to-back defending world champion in GS and a 20-time World Cup winner in the discipline, won a surprise gold as a 21-year-old in the combined event at the 2006 Torino Winter Olympics when teammate Bode Miller straddled a gate in the slalom.

But GS is the now 29-year-old Ligety’s signature event, where he arcs smooth turns in tough conditions for massive margins of victory. On Wednesday he had a nearly one-second gap after one run at Rosa Khutor, which is a lifetime in the sport of alpine ski racing.

“This one is way more meaningful than my first one. I’m not going to say my first gold medal was easy, but it came a lot easier,” said Ligety, who was immensely frustrated to leave Vancouver with no medals in 2010 and so far hadn’t raced well in super-G and super combined at Sochi.

“To win a gold medal now, especially having Vancouver being really tough and the Olympics so far here have been somewhat lackluster, and to be able to throw down in an event that I had the most pressure in and I was the favorite in, to be able to do that is awesome. This was really the event that I wanted to win. To be able to pull down in that kind of pressure and to be up there with some of the greats is really an honor.”

Six-time Olympic medalist Miller, 36, finished 20th Wednesday, tweaking his surgically repaired knee in the first run and declaring himself done at these Winter Games after becoming the oldest medalist in alpine ski-racing history with a bronze in the super-G.

“It’s asking a bit much of my left knee still on those kinds of bumps,” said Miller, who won’t compete in the closing men’s slalom on Saturday. “This is pretty aggressive stuff for the lower leg. The snow is so grippy and kind of jerks you around nonstop.”

Miller, who finished second behind Ligety in a World Cup GS at Beaver Creek earlier this season, had nothing but praise for his teammate.

“Ted has shown for several years that he’s the best GS skier, especially when the conditions are like this, kind of rolling and high-speed,” Miller said. “Other guys are having trouble carrying momentum the whole way down.

“They make some really good turns and some good sections and then they scrub a little bit over a piece of terrain. Ted just carries his speed so smooth top to bottom and he makes time the whole way down.”

Austria’s Marcel Hirscher, the reigning overall World Cup champion, finished fourth in GS for the second straight Olympics, but he’ll be a heavy favorite in Saturday’s slalom. Ligety can now focus on collecting his fifth season GS title, having finally collected the medal he always wanted.

“At a certain point I was like, ‘Let’s do it already. Let’s just get this thing over with so we can stop talking about the pressure and everything with it.’ So it’s awesome to be able to come here and compete and finally do it and get the monkey off the back. “

On Friday, Eagle-Vail’s Mikaela Shiffrin, a heavy favorite in the women’s slalom, will try to bring home the second American alpine skiing gold of the Sochi Games and the fifth medal overall, which would tie for the most ever by a U.S. team at the Winter Olympics.