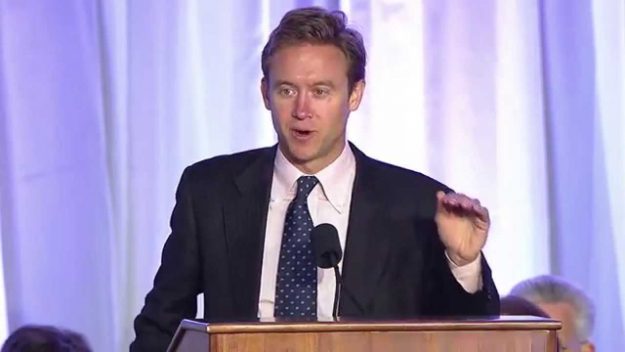 Editor’s note: On Tuesday, Jan. 17., former state Sen. Mike Johnston, whose term ended at the end of 2016, officially announced his candidacy for the Colorado governor’s office.

Back in April of 2009 I asked Vail Mountain School graduate and current Democratic state Sen. Mike Johnston the following question:

“Should he, a white, Harvard- and Yale-educated school principal who grew up in the ski town of Vail, really have a shot at being appointed to the state Senate in one of the most ethnically diverse districts in Colorado?”

At the time, the son of former Vail Mayor Paul Johnston was vying to replace Senate President Peter Groff — the first African American to ever hold that position in the Colorado Senate. Groff had been named to head up the U.S. Department of Education’s Faith-based and Community Initiatives Center in the Obama administration.

“That’s a very important and a very deep question, and I thought a long time about it before I made this decision, because I do think it’s important that there’s diverse representation in the Senate,” Johnston thoughtfully replied for my story that ran in The Colorado Independent. “People have said, ‘This is a historically black seat that you’re running for,’ and what does that mean?’ I feel like part of the lesson that we learned from the Obama race is that now in America every seat is a black seat, which is to say every seat is open to an outstanding candidate regardless of their race.”

According to The Colorado Independent this week, Johnston said he has been “approached by ‘a lot of folks’ before and after the election who have asked him look at the governorship. ‘I told them that I would take a serious look at the race and I’m doing that,’ he told The Independent.

“Johnston sees himself as someone who has built bi-partisan coalitions in the legislature to get things done, and someone able to build coalitions among all sides of the Democratic Party. The next candidate for governor in the primary will have to appeal to unaffiliated voters who might be able to participate in the primary for the first time, he said.

That big-tent approach for Democrats will be especially important in the wake of Donald Trump’s election to the presidency, and while Colorado backed Hillary Clinton and generally favored Democrats last week, it’s clear Johnston understands how divided we are as a nation and a state and how Democrats need to rethink their platform.

The color-blind approach to politics he advocated back in 2009 seems all the more poignant in the wake of the most racially divisive presidential campaign in modern American history. As Edwards resident and RealVail.com co-founder Tom Boyd pointed out back then, the race question may have been the wrong one to ask during Johnston’s first foray into politics.

A longtime education innovator who has headed up expeditionary schools in some of the most challenging educational environments in the country, Johnston always has been willing to put himself out there to fix problems that seemingly cannot be fixed — and he’s reached across the aisle to get things done. Sometimes his approaches have failed spectacularly — for instance, Amendment 66 back in 2013 — but he’s been more than willing to try.

The same cannot be said for many politicians who bury their heads in the sand and protect their own self interests rather than taking on the truly tough problems facing our society — things like education funding, immigration reform, health care policy and racial equality.

Here’s a message Johnston sent to his supporters last week:

I admit I had to fight back tears when I woke up my daughter Wednesday morning.  Not just because she wouldn’t get to see the first woman president, but because I had to explain how someone who had been “so mean” could become president.

It felt like a reversal of 240 years of our struggle to expand the circle of American belonging. Our American story – rather than an upward march toward inclusion – suddenly felt like the ‘80s movie where the popular bully pretends to befriend you, only so you let down your guard enough to be humiliated much more deeply.

But I am an unapologetic and unwavering believer in the goodness of people; that despite our flaws and our frailties we are built mostly of goodness and grace. And to those who call me naïve I can prove that conviction is rooted in data as well as desire: for every person who felt alone in America this morning there were 5 who held them while they wept. For every moment we have mourned a small act of human suffering there are five more when we have marveled at some heroic act of human salvation. We are built to love each other.

In my own life I feel those kindnesses as deeply from my family and friends who supported Donald Trump as I do from those who supported Hillary Clinton. Another candidate might have appealed to that deeply decent human instinct inside of all of us, might have used this crisis to capture “the angels of our better nature” as Lincoln did.  Trump instead conjured a mirage from the demons of our darkest fears. But it would only validate his cynical version of America for me to wake up this morning and let him convince me that mirage is real: that the 50% of America I counted as brothers and sisters 48 hours ago somehow loathe the people I love and despise the things I hold most dear. I rejected that vision with my vote on November 8th and I will reject it with my voice in all the days to come.

None of this should minimize the anxiety of this moment, it is to suggest a different strategy for combating it. I am acutely aware that for me this loss seems philosophical more than personal. As a white man, I still have the privilege to be welcome in Trump’s America because I am not someone on his enumerated list of the problems. But I spent yesterday talking with friends who are afraid of being deported, harassed, profiled and abused. These AMERICANS suddenly feel like their “life, liberty and pursuit of happiness” are in grave danger, like the most foundational of American promises has been ripped away from them. That feeling is not disappointment, it is terror. When I think about what my friends who are Trump supporters might do if their fundamental liberties felt threatened, I know that the fear wrenching the soul of the America who has been “othered” must now be recognized and redressed.

So where do we go from here?

I believe in the goodness of people and the awesome power of coordinated action, so here is what I commit to do:

Belong. Trump has made much of America feel like they aren’t welcome here, like they don’t “belong” in their own country. I don’t believe that the 60 million people who voted for Trump believe that, but he made that claim with your voice, so I am going to invite you to join me in repairing that breach. The last American decade has been marked by a steady march toward inclusion, led by our president, our churches, our courts and our communities. If our new president is not going to send that message himself, it is incumbent upon us to send that message far more forcefully ourselves. So, I will fight every day to ensure that everyone feels like they belong here. If the neighbors in my community don’t feel tolerance and respect and inclusivity from their president, I will make sure they feel it from me and from the institutions I support. I will take my country back in the name of that sacred value that doesn’t come up for a vote: “we hold these truths to be self-evident that all are created equal.”

And I will expect that my friends who supported Trump — people of faith and good will — will do the same. That they will go out of their way at every moment to communicate to immigrants and women and Muslims and people of color that they belong here, that this is their America too, and that we are honored to share it with them. I was so pleasantly surprised to see the way that Trump’s degrading language about women compelled thousands of courageous women who had survived sexual harassment and assault to share their stories. From his very public violation of women emerged deep learning for many and powerful healing for some. We must now harness these acts of political exclusion as catalysts for a massive movement of personal inclusion.

Every time I see someone in uniform I thank them for serving our country and I have taught my kids to do the same. I do that both because we are deeply indebted to them and because there have been dark moments in American history when our soldiers never heard that from their neighbors, and I want to play some small part in righting that wrong. This moment will require a similar level of relentless personal advocacy for belonging. We have entered a new moment in America where people suddenly feel afraid for their difference; Trump may have the power to stir that fear, but the other 300 million of us have a far greater power to allay that fear with a deep sense of belonging. To do that each of us must fight this loud public narrative of exclusion with millions of micro moments of inclusion so that each time my son sees someone wearing a yarmulke or a hijab, speaking in Spanish or Chinese, or holding the hand of a boyfriend or a girlfriend, we find in our own way the language to say thank you, thank you for loving our country and for sharing it with us. It is on us now to make perfectly clear that in our America, you belong.

There is real hurt here, the hope comes from the truth that a hurt this real can only arise from a bond this deep. It is the people we love who can hurt us the most, not because they are the most cruel, but because we have the largest part of ourselves invested in them. This hurt does not mean we are farther away from our fellow Americans, it is the living proof of how deeply bound together we still are.

So I will work to build back those relationships where they are the most frayed, not by trying to re-litigate our plans for immigration, but by watching a football game together, or fixing a car bumper. By taking our kids to the park or having a beer, by creating the spaces where we can remember all the reasons we loved each other before we broke each other’s hearts.